Senators square off before the vote on a controversial bill that would help allow students to pray at school events.

Voters did, however, approve a measure intended to make it easier for citizens to place charter-amendment initiatives on the county ballot by doubling the number of days to collect petition signatures.

The split results on the two charter amendments — one passing, one failing — reflected some support from a disenchanted Miami-Dade electorate for overhauling county government. Yet deep distrust remains about any move that would raise commissioners’ pay; it was the 13th time in five decades that voters rejected a proposed salary hike.

About 58 percent of voters supported the petition-initiative measure, the county reported. Fifty-four percent opposed the salary and term limits proposal.

The defeat of the salary and term-limits measure was the latest in a string of failed charter-reform attempts since a task force four years ago proposed a slew of changes to the Home Rule charter that governs county government. A restive electorate, unhappy with business as usual at County Hall, has repeatedly viewed the proposals as poorly written or too weak.

“There was just too much ambivalence about these amendments,” said Victor Diaz, a Miami Beach lawyer who chaired the 2008 Charter Review Task Force and supported both proposals.

Gov. Rick Scott breaks his silence on the Florida primary. Here's his statement:

"Congratulations to Governor Mitt Romney on his victory tonight.  Clearly, his message of restoring economic prosperity to our nation has resonated with voters. Floridians, like voters around the country, are focused on jobs and know that we need a strong federal partner who is committed to lowering taxes, cutting regulations, and allowing companies to out-compete their global competitors.

"Floridians have already played a critical role in choosing our party’s nominee, and I look forward to welcoming our nominee back to our great state for the Republican National Convention in Tampa this summer."

Voters in the rural counties of Gadsden and Washington became the first in the state to agree to install slot machines outside of Miami-Dade and Broward on Tuesday, approving referendums allowing their local horse and dog tracks to offer the Las Vegas-style games.

Gadsden County voters approved slots 63 to 47 percent, while Washington County voters had a 57-43 percent split with some precincts still reportiong.

But despite their victories, the slot machine battle is likely to be headed for court. The state agency that regulates pari-mutuel gambling has said it will not sanction the games, citing a non-binding opinion from the attorney general who has ruled that the state has no authority to authorize slot machines outside of Miami-Dade and Broward counties.

Meanwhile, as state regulators balk, legislators have quietly stepped in with an Election Day deadline of their own.

Mitt Romney’s lopsided Florida victory over Newt Gingrich proved the Republican front-runner can win conservatives, triumph in debates and fight a bruising campaign that can lay an opponent to waste.

Romney’s Florida win also showed Republicans he can run the kind of national campaign that can defeat President Obama in November.

"Doing well in Florida,” Romney said Tuesday, “is a pretty good indication of your prospects nationally."

That’s because Florida is more like the nation than any of the other three early states.

North Florida is the Deep South. Southwest Florida is like the Midwest. Latin America meets New York in Southeast Florida. And it all mixes together along the I-4 corridor from Tampa Bay through Central Florida.

Early results indicated he tied Gingrich in North Florida, but was handily winning everywhere else.

“Florida is the nation’s reflecting pool,” said Alex Castellanos, a Republican consultant who worked for Romney in 2008 and George W. Bush in 2004. “It is what New York and Ellis Island used to be, the gateway to the country’s future.”

Before the first ballot was even cast on Election Day, Romney had a cushion of early votes that could have exceeded 60,000. While the other campaigns were silent in early January, Romney advertised on radio and television and aggressively called and mailed early voters, who cast more than 632,000 ballots.

With the big results in from Florida, Castellanos said, the Republican race is almost history, though Gingrich has vowed to fight all the way to the national convention in Tampa this summer.

“This race won’t end tonight, but it will be over,” Castellanos said. “Romney will have done something no other non-incumbent Republican candidate has ever done: He really only lost 1 of the first 4 contests. That’s remarkable.”

As debate wraps up on the prison privatization issue, sides take aim at one another in the House.

A bill that would have given in-state tuition to students who live in Florida for two years -- regardless of their parents' residency -- died in the Senate's higher education committee. One point of the bill was to help children of illegal immigrants, who currently have to pay out-of-state tuition, afford college. That out-of-state cost is three to four times as much.

"The intent of this bill, in the end, is to try to rectify a wrong," said Sen. Rene Garcia, R-Hialeah, who sponsored the bill. "I just want to make sure the students have the same privileges that I did, or that you had... Regardless of their parents' status."

But some senators had concerns that the bill would open up a loophole for students with parents in other U.S. states who could otherwise afford the out-of-state tuition costs. And in the end, it failed.

"The bill that was presented here, it has a lot of emotional draw to it," Sen. Steve Oelrich R-Gainesville, committee chair, said after the meeting. "The idea was that we're quote-unquote punishing the students. They didn't ask to be born here. But on the same token, the other part that bothers me is, why would we give favor to children of illegal aliens over children of legal out-of-state, longtime American citizens? That just wasn't right."

The dominoes are falling.

Hasner's move makes sense on more levels than that. Rep. Connie Mack, of Fort Myers, is cruising in the U.S. Senate race, leading in the polls and, soon, fundraising. Hasner could have handled that.

But Hasner's campaign was dealt a serious blow, of sorts, bythe presidential campaign of Mitt Romney, who stumped in the final days across Florida with Mack. Mack picked up precious TV time and the aura of the favored.

Connie Mack still has to run in a primary, though, and former Sen. George LeMieux is sticking with it. At least for now.

Translation: It's a recipe for a lawsuit.

So now the question is: What happens to this Republican congressional musical-chairs game if Democrats sue and win the right to have new maps?

The bill (SB 2038) is a priority of Senate GOP leaders who want to outsource 26 prisons in South Florida to save money (at least $16.5 million in the first year, they say) and answer a judge who they say wrongly ruled that last year's privatization was done illegally by budget language. 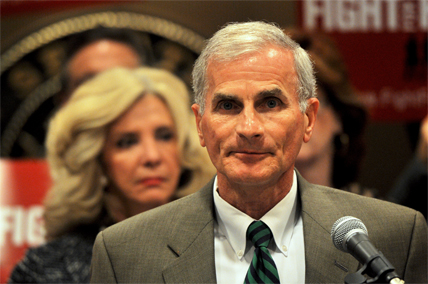 But Haridopolos and two senators managing the bill -- budget chairman JD Alexander and Rules chairman John Thrasher -- appear to be fighting an uphill battle to nail down the 21 votes to pass privatization. In the 28-member GOP caucus, at least 10 Republicans are ready to vote no or to vote for a killer amendment by Sen. Mike Fasano, R-New Port Richey, that would replace privatization with a study.

If the bill fails, it will be a major defeat for Haridopolos, who stopped discussion without bringing up Fasano's amendment for a vote. The Senate president said he wanted to give the issue the time it needs Wednesday, but Fasano said: "My amendment would have passed, and to prove my point, they stopped." Fasano says there are enough votes, including 11 of 12 Democrats (all but Orlando's Gary Siplin), to kill privatization.

Senate GOP stalwarts such as Charlie Dean of Inverness and Steve Oelrich of Cross Creek -- both former sheriffs -- are opposed to the massive privatization expansion. "It's just wrong," Dean told the Times/Herald's Katie Sanders. Dean is separately grappling with the state's planned closing of a prison in his district, in Jefferson County, which Alexander conceded was a complicating factor.

For two hours, senators sparred over whether privatization will save money. Skeptical questions abounded from Republicans Paula Dockery and Jack Latvala, and Sen. Nancy Detert said she likes Fasano's amendment. When the savings argument faltered, senators cited a wrong-headed judge striking down Senate budget language. "I don't think anybody in here wants a court to dictate how we do our budget," Thrasher told senators. The Senate resumes debate at 1 p.m. Wednesday. -- Steve Bousquet

Allen West to run in Rep. Tom Rooney's district (told ya so),

We confirm what The Shark Tank confirmed what we heard earlier: Rep. Allen West is to run in Rep. Tom Rooney's Congressional District, which is being redrawn with all the others in Florida. Rooney is going to run in one of the two new Congressional districts in South Florida that stretches from Martin County into Charlotte County.

Expect a West endorsement of Rooney.

It's tough getting elected as a Republican in the People's Republic of Broward County, one of the bluest stretches of Florida's political real estate. Still, US Rep. Allen West pulled it off in 2010, when he bested Rep. Ron Klein.

But now the Florida Senate's proposed map for Congressional seats indicate it could be even tougher for the tea-party favorite to win District 22. The proposed district is 4 percent more Democratic than it currently is.

And that could be bad news for Rep. Tom Rooney, R-Tequesta.

"Allen's strongly considering making a move," said a highly placed source affiliated with West's camp. "It's not a big move, just a few miles away."

West's best move -- running for U.S. Senate -- still appears to be off the table. But West gave it a second thought recently, another source said. And he could jump in that race, though it's less likely.