Eight months before Election Day, state Rep. Ana Rivas Logan -- who has yet to draw an opponent -- is getting attacked in campaign fliers purportedly sent by an inactive political committee whose chairman is dead.

Logan is one of several local state representatives whose new legislative district will likely be redrawn this year to include another, fellow Miami Republican -- in her case, Rep. Jose Felix Diaz -- setting up an intra-party battle over who will keep the seat.

Diaz says he had nothing to do with the two attack mailers that began going out to voters two weeks ago, days before the annual legislative session began in Tallahassee with Miami-Dade lawmakers pledging once again to remain united.

The once-a-decade redistricting process, where legislative seats are redrawn to keep their populations equal, typically pits lawmakers against each other vying to remain in districts that make their reelection prospects most favorable.

"Ana and I have spoken -- I'm not responsible for them," Diaz said of the mysterious mailers. "I do not approve of them. I have not had ties with anybody who did them."

She points to Diaz sending a holiday card to her constituents, knowing that tentative redistricting maps show the two colleagues running in the same district come the fall. Diaz says he sent the cards to his constituents and voters in surrounding districts -- including but not limited to Logan's.

"I sent out a personal greeting to voters in my district, and I went and expanded the boundaries because, you know, redistricting has started, and we don’t know what districts we’ll run in," he said, touting his positive campaign in 2010, when both he and Logan were elected. The two live four miles away from each other.

While the holiday cards had Diaz's name on them, the mailers attacking Logan do not. They say they were sent by Families for Tax Relief -- a closed, third-party electioneering communications organization whose chairman, Vero Beach Republican Rep. Stan Mayfield, died more than three years ago.

A political action committee with the same name and without a listed chairman is also closed, according to the Florida Division of Elections. The ECO's last activity was in 2007; the PAC stopped reporting any activity in 2009.

"It's an illegal piece, totally, totally illegal," said Logan, who also said she reported the fliers to the Miami-Dade state attorney's office. She added that older, Hispanic constituents have told her about a Spanish-language robocall attacking her.

"I'm flattered that they think they need to start this early on me, but it's a distraction," Logan said. "It's a distraction and it's counterproductive to our work as a delegation up there."

"Ana Rivas Logan voted for higher taxes," one mailer says in bold, red letters in English and Spanish. The other one reads, "Can we afford Ana Rivas Logan?"

The pieces refer to a 2005 vote Logan took as a Miami-Dade School Board member. The board lower its property-tax rate, but because property values had risen so much, homeowners paid slightly more in taxes. A typical, $158,000 home purchased in 2004 paid about $134 more in school district property taxes; longtime homeowners protected by state law paid about $7 more.

Logan was the sole Republican on the School Board to vote for the tax rate, which she said allowed the school district to pay new teachers higher salaries the board had promised.

"I have been tough on taxes. I have lowered the millage rate every single year that I was on the School Board," Logan said. "I guess no good deed goes unpunished." 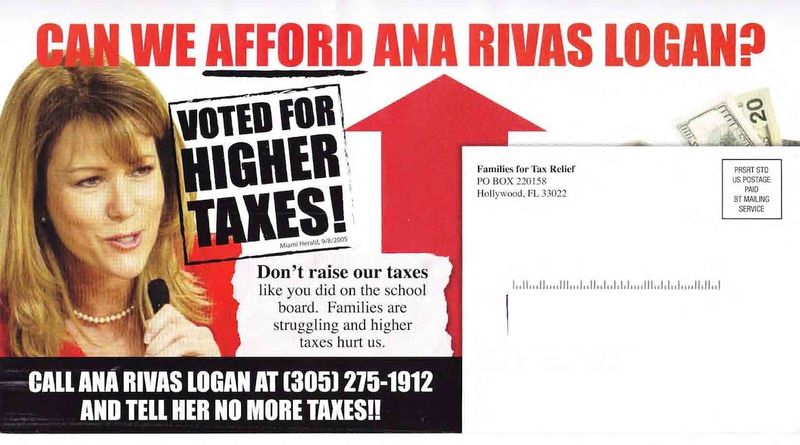