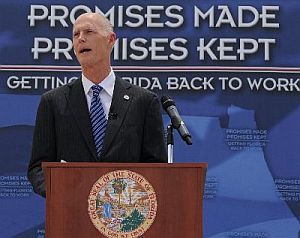 More Floridians are working since Rick Scott, the self-anointed "jobs governor," took office a year ago.

Why? The promise Scott made as an outsider businessman isn't the one he's keeping from his desk in the state Capitol.

PolitiFact Florida is tracking 57 of Scott's campaign promises, and one year in, we find Scott has had more successes than failures. But in the case of the jobs promise, he has much more work to do. Here's the PolitiFact progress report.