« Helped by $10m from casino magnate, Gingrich says gambling is a "worry." | Main | PPP: Romney up by 8% over Gingrich in Florida »

The conservative Shark Tank blog says Herman Cain could endorse Newt Gingrich tonight in Palm Beach County during a Lincoln Day dinner there. There has been buzz for a month Cain might do it, Gingrich's campaign said to expect a big endorsement tonight and earlier this evening GOP operative Roger Stone suggested Can might be the man.

Whether this makes a difference at all is a good question. Perhaps we should ask Craig Miller. Who's that? He's the guy in single-digits in the Florida Senate race primary polls who was endorsed by Cain recently.

But who knows, to the degree there's an untapped reservoir of tea-party-like supporters who will be swayed by Cain, this could account for a few votes for Gingrich. But will it be enough to overcome Mitt Romney's ever-widening lead in the polls? Probably not.

Here's what a top-notch Republican consultant just sent us as a joke that's nevertheless probably accurate: 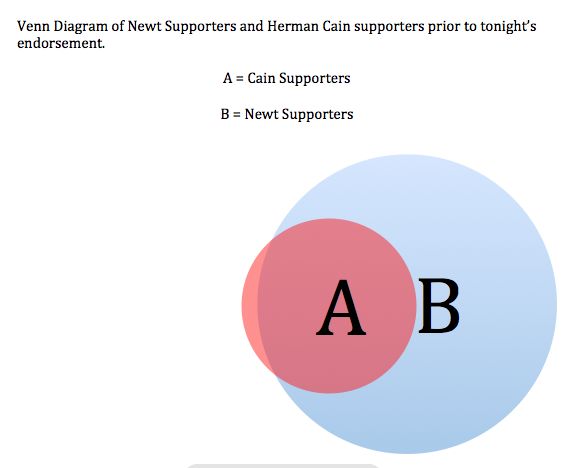