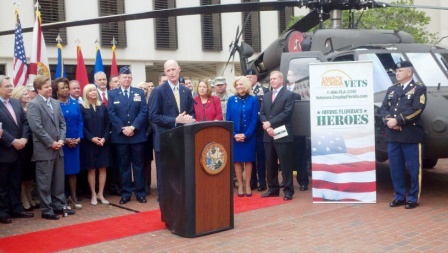 In honor of Florida National Guard Day at the Capitol, state leaders have begun a campaign to get military veterans back to work.

Staff Sergeant Joseph Azula has a cool job. He was in the Capitol showing off an Avenger Weapons System. “It’s designed to shoot down cruise missiles, helicopters, fast moving enemy aircraft,” said Azula, “and it has a range of about ten kilometers. So it’s really kind of the last line of defense, as far as air defense goes, of the United States military.”

Incoming Senate President Don Gaetz says the unemployment rate for Florida’s veterans is lower than the overall population. He and current Senate President Mike Haridopolos did some checking. “We found that 20 percent of our serving members of the Florida National Guard were unemployed,” said Gaetz. “We found that 40 percent of our National Guard members who were coming back from combat zones were unemployed.”

With helicopters and tanks in the background, Gov. Rick Scott joined lawmakers and business leaders to help launch a year-long effort to find work for veterans. He said, “We are here to make a commitment to our military and our veterans. That commitment is what the Hiring Our Heroes campaign is all about.”

Employers interested in hiring veterans can get help from the Employ Florida Marketplace. Workforce specialists are set up around the state to help employers and veterans connect.