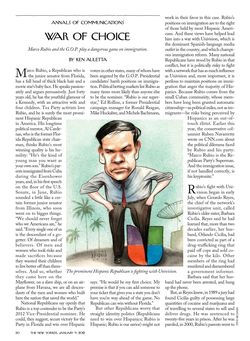 Univision honchos showed they're biased when it comes to covering immigration and they acknowledge offering "options" to Sen. Marco Rubio amid talks over a controversial story about the drug bust of the Republican's brother in law a quarter century ago.

That's a takeaway from the New Yorker's piece "War of Choice. Marco Rubio and the G.O.P play a dangerous game on immigration." It hits news stands tomorrow.

The piece mentions our Oct. 1 Miami Herald report (it is here in full) in which Univision insiders and Rubio staffers told us that the network's news chief, Isaac Lee, offered to soften or kill a story about about the drug bust if the Senator cooperated with the network. Based largely on the Herald report, Republican presidential candidates later announced they'd boycott a proposed Univision debate if the network or Lee didn't apologize.

Lee denies offering a quid pro quo. He wouldn't speak with us for our original piece, and instead issued a written statement. He sat down with The New Yorker, though, and shed more light on the subject:

[H]e oﬀered three Univision options: report a stand-alone news story on Orlando Cicilia; have Senator Rubio coöperate on a network proﬁle; or have him be interviewed on Jorge Ramos’s “Al Punto.” Whatever the venue, Lee says, the issue of Orlando Cicilia would have been raised.

That means a standalone drug-bust story might not run depending on how Rubio played his cards. That is, if Rubio appeared on "Al Punto" and answered a question or two about Cicilia as part of a broader interview, then a standalone drug-bust story might not run. And just because an issue is "raised" in an interview doesn't always mean it will be fully broadcast.

Consider those points, and Lee's on-the-record New Yorker comments along with our original story that said in the second paragraph: If Rubio appeared on Al Punto —Univision’s national television show where the topic of immigration would likely be discussed — then the story of his brother-in-law’s troubles would be softened or might not run at all, according to Univision insiders and the Republican senator’s staff.

Picking up where The Herald left off, The New Yorker writes: Although Jorge Ramos has interviewed every President since George H. W. Bush and every prominent Hispanic public oﬃcial, he has been unable to lure Rubio to his show to discuss immigration, or anything else.

Note the verb "lure." It implies offerings, enticements. The paragraph also speaks to a sense of frustration at Univision over Rubio.

The New Yorker piece also reveals the levels of bias at the top levels of Univision:

According to Univision’s news president, Isaac Lee, the network is openly committed to “pro-Hispanic” immigration reform, and it has a particular slant on the news: a dog biting any man is not a story, but a dog biting a Hispanic man is...

Haim Saban, the chairman of Univision, wrote, in an e-mail, “The fact that Rubio and some Republican Presidential candidates have an anti-Hispanic stand that they don’t want to share with our community is understandable but despicable. So ‘boycotting’ Univision, the largest Spanish-language media company in the U.S., is disingenuous at best and foolish at worst.”

Just how the Cuban-American Rubio has an "anti-Hispanic" stand is not spelled out in the piece or by Saban. But it appears that Univision sees opposition to the DREAM Act and so-called "amnesty" as a sign of ethnic bigotry. The Democratic National Committee must be giddy that this comes from the nation's largest and most-influential Hispanic network. But then, the DNC appears to already be funded by Saban, whose political largesse wasn't mentioned in this particular New Yorker article.

The New Yorker piece is not intended to -- nor does it come across as -- a defense of The Miami Herald or a shot at Univision. On the whole, it's fair, well-written and interesting. It's more about Rubio and Univision than The Herald. It also suggests the original Herald piece was part of "a carefully orchestrated campaign" connected to the Republican push to move Florida's primary vote to fifth-in-the-nation status on Jan. 31:

They [documents], and interviews with the people involved in the conﬂict, suggest that a complicated and politically risky game unfolded as the Republican Party shifted the date of the Florida primary. Rubio had every reason to want to punish Univision, and the national Republican Party had every reason to want to avoid holding a debate on a network that would ask aggressive questions about immigration.

Spanish-language Telemundo plans to host a debate, but The New Yorker's Ken Auletta suggests the network isn't up to the task: there’s little question that a debate sponsored by Univision, which Republicans now seem to view the way Democrats view Fox, would have been much tougher than one sponsored by Telemundo.

Consider that Telemundo is owned by NBC, which controls MSNBC --the liberal alternative to FOX. So MSNBC's Spanish-language cousin is now a preferred forum? Also, the Republican Party of Florida is co-sponsoring a Jan. 26 CNN debate with the Hispanic Leadership Network, which is affiliated with former Gov. Jeb Bush (whose wife is from Mexico).

As for The Herald's coverage, Auletta writes we "implied that Univison tried to blackmail the Senator... [and] portrayed the conversation as a shakedown." That's disputable. Auletta is skeptical about at least one aspect of the quid-pro-quo allegation: The notes of the conversation between Rubio’s oﬃce and Univision don’t provide a convincing case that Univision proposed dropping any mention of Senator Rubio’s brother-in-law’s criminal past if Rubio consented to an interview.

The Herald story wasn't just based on the notes. And we repeatedly said that, according to the sources and notes, Univision offered to soften "OR" spike the story. We weren't sure. We weren't on the conference call in question. Also, The New Yorker says that " all six of the Univision employees on the call... say they were not called."

False. We called Lee and others. And when we tried to speak to Lee, we were directed to Univision's p.r. department.

Says The New Yorker: The Herald reporter Marc Caputo says that the tip for the story ﬁrst came to the Herald “from friends of Rubio.” Caputo found the story credible in part because he thinks that Univision has become so partisan that it would be willing to cross journalistic lines to have the opportunity to grill Rubio on immigration.

He said, in an e-mail, that the network “has virtually crusaded on behalf of its viewership for the Dream Act,” and that “it’s not tough to believe” that the network would have “essentially punished Rubio for not going along with the program.”

One can fairly ask, as Caputo does, whether Univision crossed boundaries to hype its story.

Here's a fuller version of some of the written comments I sent Auletta last month:

I want to make sure that you accurately represent why I believe Isaac Lee could ("could") have strong-armed/offered a quid-pro-quo to Rubio's staff. Your piece, according to my understanding from Nick, suggested I found the allegations about a quid pro quo credible simply because of the lengths Univision went to get Rubio on its shows. I believe I said far more than that. I thought I told you that it was the "totality of circumstances." It wasn't just the efforts of Univision to get the interview. It was the piece Univision ran itself, which made Mr. Cicilia appear to be like Tony Montana. It was the dredging up of a 24-year-old drug bust without a news hook. It was the cold-call of the private citizen. It was the parking of news truck in front of a woman's house to embarrass her. It was the sources in Univision's own shop who came to us. It was the effort to try to get Gov. Scott to say whether Rubio should resign over this. Then there's the issue of immigration. Univision has virtually crusaded on behalf of its viewership for the Dream Act. Just like Fox for conservatives or MSNBC for liberals, some of Univision's personalities practice advocacy journalism that appeals to its viewers. You've suggested it's far-fetched that Univision would essentially punished Rubio for not going along with the program. But it's not tough to believe. Consider that the network stands to profit and expand its growing viewership by increasing its political coverage -- a growth industry in journalism (cf. Politico, The Daily Caller, the new National Journal....). The network wanted to sponsor a Republican presidential debate for a reason. There's big money to be made on political ads, with the Hispanic vote up for grabs and an estimated $1 billion-plus to be spent on the presidential race. This is about money, branding and bragging rights. Is it implausible to think a news chief would inject his own biases and agenda into his company's reporting? I've seen descriptions of Fox's Rupert Murdoch as a "coldly amoral" person who "rarely elevated taste or journalism." You wrote those words, Ken. Perhaps -- just perhaps -- similar descriptors could apply to a liberal-media type like Isaac Lee. Some liberals have said we've gone easy on Rubio. If so, I'll draw your attention to the stories my colleagues did questioning his use of a Republican Party of Florida credit card and the fact that it was the subject of inquiry by federal investigators. As for my own work regarding Rubio, one of my first pieces about him for The Herald in 2003 showed how he and his colleagues skipped out on an important vote to go to a World Series baseball game (a report, Rubio feared, that had the potential to damage his shot at being House Speaker). I've also covered how, as House Speaker, he slipped language into the budget that helped a friend and contributor bid on a Florida Turnpike gas concession contract. I helped assemble and edit another piece rapping Rubio for failing to disclose a home-loan connected to politically influential Miami leaders. I later reported how, on his way out as speaker, he inked consulting contracts with two hospitals to which he helped steer state money. I also showed how he stuffed nearly a quarter-billion dollars in earmarks into the state budget but campaigned last year against earmarks. . (Note: in response to questions from some readers, this blog was updated to include this last paragraph of the letter)