CPAC wants Marco Rubio for VP. But does it matter? 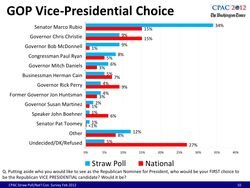 In the presidential straw poll, Mitt Romney got 38 percent of the vote, followed by Rick Santorum (31) Newt Gingrich (15) and Ron Paul (12).

Does this straw poll regarding Rubio have any predictive value? We asked pollster Tony Fabrizio, who conducted a land-line scientific poll of Republicans finding Rubio and Christie tied at 15% nationwide for VP.