Faced with writing a precedent-setting ruling that could shape the state’s political lines for decades, the Florida Supreme Court on Wednesday aggressively grilled lawyers representing Democrats and Republicans, asking them how to interpret the state’s new redistricting rules.

“We need help,’’ said Justice Barbara Pariente, who dominated the questioning during the three-hour hearing into the Legislature’s reapportionment plans.

The court has until March 9 to decide if the maps comply with the Fair Districts anti-gerrymandering standards approved by voters in 2010. It has three options: Send the maps back to the Legislature to try again; validate the maps as compliant, validate the maps, but acknowledge that a lawsuit could be brought through the trial court to sort out flaws.

“You are the ultimate authority,’’ said Jon Mills, a University of Florida law professor and former House speaker arguing for the Florida Democratic Party. The Legislature’s interpretation “may be interesting but your interpretation is binding.” Read story here.

House members saved discussion of an abortion bill until 10 p.m. Wednesday, readying it for a likely Thursday vote in the chamber.

Its scope is wide. HB 277 would require pregnant women to wait 24 hours before receiving an abortion, among many other things.

Democrats grilled sponsor Rep. Rachel Burgin, R-Riverview, for close to an hour about her bill, questioning its restrictions on new abortion clinics, a requirement that physicians who perform the procedure undergo yearly ethics training, and making the state report demographic information about each abortion to the Centers for Disease Control and Prevention, among other elements of the bill.

They asked about the bill's newest requirement of doctors to describe "which steps could be painful to the fetus." According to the bill, "there is evidence that, by 20 weeks of gestational age, fetuses seek to evade certain stimuli in a manner that, in an infant or an adult, would be interpreted as a response to pain."

"I think this bill goes in the right direction in letting the mother know that babies can feel pain in five months," said Rep. Daniel Davis, R-Jacksonville, who sponsored a bill this session banning abortions after 20 weeks on this premise. Elements of his proposal, though not the 20-week ban, were added to Burgin's bill.

House analysis notes that the capacity of the fetus to feel pain is the subject of "ongoing research and significant debate." Here's how committee staff put it:

Court or other rulings that uphold foreign law would be void under a widely-criticized measure poised for its final House vote Thursday.

Rep. Larry Metz, R-Eustis, the bill's sponsor, first denied HB 1209 targets a specific group or case. But Democrats eventually pushed him to say the bill stems from a Pakistani case, and "several others throughout the United States."

Florida counties stand to lose nearly $300 million in state revenue over the next few years, a punishment of sorts for what the state says are unpaid Medicaid bills.

But counties say much of what the state categorizes as delinquent bills are actually erroneous charges created by a faulty state billing system, and that the state's decision to collect is masking a ploy to shift additional costs to local governments.

Under the controversial proposal, the state would withhold revenue sharing dollars from counties equal to a portion of the delinquent bills as well as any future payments counties owe under the Medicaid program. Currently, counties are allowed to dispute the amounts they owe and pay what they think is fair.

Miami-Dade could lose an estimated $31 million in revenue sharing in the upcoming fiscal year with the new system and Pinellas could see an $8.6 million decrease, according to the Association of Counties.

"We have to go back and explain to our taxpayers a $7 million increase in costs for things we don't even believe are verifiable or justifiable," said Gretchen Harkins, Broward County director of intergovernmental affairs.

1Miami group gets its meeting with Marco Rubio

A busload of South Floridians who traveled to Washington unsuccessfully in December to land a meeting with Sen. Marco Rubio finally got to sit down with the Republican senator.

The aim of the group, called 1Miami, was to meet with Rubio and talk to him about the challenges they've faced as a result of the recession, spokesman Jose Suarez said in an email.They camped out in Rubio's Washington D.C. office (during business hours) for several days in December, but they weren't able to land a meeting. But they finally got their meeting this week, in Washington.

Made up of organized labor, community groups and faith-based organizations, 1Miami began last spring as part of an effort to shift the national debate to the economy and jobs.

This time, though, the 1Miami group met with Rubio for 30 minutes. Suarez said the 1Miami pilgrams were thankful Rubio finally met with them, but that they were very disappointed with what he had to offer. Rubio's story "represents the American Dream," Suarez said. "But he needs to stop talking about his American Dream and start helping us defend ours."

"As Senator Rubio becomes a rising star in his party and prepares to travel around the country to promote his book, Miami is falling to the bottom of the worst lists: the poorest, most corrupt, most miserable, biggest gap between rich and poor and the largest cuts to social services," Suarez said. "We, at 1Miami, invite Senator Rubio to travel back to Miami, instead, and survey the burgeoning and serious problems that have yet to attract the political leadership we need to fix our problems and put our people back to work."

Senate sends out 'decorum memo' to remind members to be kind

A week after the dust-up over the 2014 Senate presidency fight that provoked teeth-clenching anger and charges of betrayal within the normally subdued Repubican caucus, Senate Rules Chairman John Thrasher has sent out a "Decorum Memo" to his fellow colleagues.

The gentle reminder from Thrasher, R-St. Augustine, who provoked some of the anger, describes how senators should refer to each other with their honorary titles when on the floor, how they should inform each other when they plan to offer an amendment to their bills and how they should give each other a heads up when they will be speaking against each others' bills.

"These small acts of personal considerations will hellp make it possible to handle the foreseeable conflicts and heavy workload ahead with a decorum benefitting the Senate," he writes. Download Decorum Memo

Their chief concern: HB 7119, which would revise the School Readiness Act. They say the proposal would water down the state's high standards for school readiness providers -- and prescribe a one-size-fits-all model to Early Learning Coalitions across Florida.

"What is at stake here is making genuine progress in helping children to succeed in school and life," said David Lawrence Jr., chair of The Children’s Movement of Florida.

"This is an all-out attack from Tallahassee on local communities," Torres said.

HB 7119 and several other bills were filed in response to an audit of the state's Office of Early Learning that found possible instances of fraud and waste.

On Wednesday, the early learning advocates said they were more comfortable with a conforming bill by Sen. David Simmons that enacts some reforms, but maintains the educational standards. The group also praised efforts by Rep. Marti Coley to preserve high quality programs.

Said Lauren Faison, CEO of the Early Learning Coalition of the Big Bend Region: "We are hopeful that any legislative changes that do stick will preserve quality, local control and our ability to serve our families."

After hours of debate stretching over two days, the Senate's Budget Committee approved reforms to the no-fault car insurance system. Massage therapists and accupunturist are still left out of the personal injury protection, or PIP, program as senators rejected several amendments related to these two professions.

The committee approved SB 1860 on a 15-5 vote in which Republican Sen. Mike Bennett of Bradenton joined four Democrats voting "no." Before the vote, Bennett said the measure was destroying companies and costing people their jobs without getting at the core issue of ending fraudulent claims.

"I want to clean up PIP, too, but what we're doing here is absolutely wrong," he said.

A relaxed Gov. Rick Scott welcomed Keys residents to Tallahassee Wednesday on Florida Keys Day and the governor got a warm welcome from the visiting Conchs when he spoke the magic words: "Wastewater treatment." The top legislative priority for Monroe County in this legislative session is getting money and a bill to complete the island chain's sewer system by 2015. "I know that's a project we need to do," Scott said. 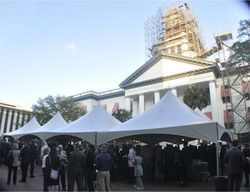 As Democratic Rep. Ron Saunders of Key West sat nearby, Scott told the group that Keys representatives "are doing a great job." He added: "I've been shocked. I've been up here for 14 months, and some people, they just don't create great relationships."

All Cuba politics are local...including in Ireland

The long arm of Cuban politics reached across the ocean this week to Galway, Ireland, where the city council is considering a monument to Cuban revolutionary Che Guevara.

"The romanticizing image that this monument would portray would serve to diminish the brutality that was committed by Che and the painful suffering endured by many Cuban-American families and his other victims far and wide," she said. "Che Guevara was a ruthless killer who should not be idealized.  Instead of honoring a killer, the City Council of Galway should honor the victims of Che and the Castro dictatorship by rejecting this proposal."

Rep. Mario Diaz-Balart, R-Miami, called Guevara a "merciless executioner who reveled in the murder of men, women and children in cold blood."

"Galway is a city where people have the right to vote, the right to worship freely, the right to speak freely, and access a free press -- all of which "Che" Guevara and his murderous associate, dictator Fidel Castro, ruthlessly suppressed," Diaz-Balart said. "Having a memorial to this cruel assassin is a shameful affront to the thousands of Cubans he murdered and utterly ignores the truth of who "Che" Guevara actually was."

The Irish Times reported this week that the proposal has the full support of Galway's city council, and is currently before a public arts subcommittee. The Cuban and Argentinian embassies will pay for the project, the Times reported.

"It's not going to cost a red cent to the taxpayers of Galway city or the nation," Galway City Councillor Billy Cameron told another Irish newspaper.

Guevara's grandmother, Ana Lynch y Ortiz, was descended from one of the Lynch family of Galway who emigrated to Argentina in the mid-18th century, the Times reported. Guevara reported mentioned his grandmother's Irish roots during a stopover in Shannon in 1965.