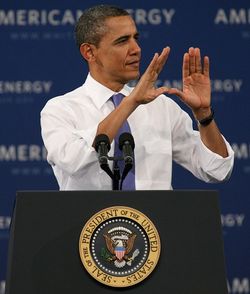 President Obama stopped in Miami on Thursday to refuel his re-election campaign with big-donor cash and to bash Republicans for politically “licking their chops” over the high price of fuel at the pump.

“Some politicians always see this as a political opportunity. You’re shocked, I know,” Obama said to a crowd of hundreds of University of Miami students.

“Only in politics do people greet bad news so enthusiastically.  You pay more, and they’re licking their chops?” Obama asked rhetorically. “And you can bet that since it’s an election year, they’re already dusting off their three-point plans for $2 gas.”

Obama’s likely reference was to third-place Republican candidate Newt Gingrich, who has promised $2.50-a-gall-gas on a “drill-here, drill now” platform.

All the Republican candidates have criticized Obama for not encouraging enough domestic fuel production and for rejecting what’s known as the “Keystone Pipeline,” which would deliver oil from Canada to Texas.

Obama never mentioned Keystone, but he did say that “my administration has approved dozens of new pipelines, including from Canada.”

The president also boasted that “under my administration, America is producing more oil today than at any time in the last eight years.”

Unmentioned by Obama: nearly all of that drilling was approved under his predecessor, President Bush.

Obama said, in the old days, he would stay and watch the Miami Heat-New York Nicks basketball matchup, but he had other things to do. Specifically, he has to raise money.

Obama is hitting up three high-dollar fundraisers: one at the swank Biltmore Hotel in Coral Gables, another at the Pinecrest home of a top Democratic fundraiser and a third at the Orlando home of basketball star Vince Carter.

Obama’s visit, the second this year, comes as the economy is showing signs of improvement along with his poll numbers. Still, most Florida polls show his approval rating under 50 percent in a state that’s still plagued by high unemployment and home-foreclosure rates.

The Republican National Committee noted that, since last year, the average price for a gallon of regular gas in Miami has risen 82%, to about $4 per gallon.

“President Obama promised to be a leader on energy policy when he was campaigning in 2008, but gas prices have skyrocketed since he’s been in office with most Floridians paying well above the national average,” Sharon Day, a Broward Republican and RNC co-chair, said in a written statement.

“It’s clear from President Obama’s focus on campaigning in Florida today – at both fundraising and a photo-op events,” she said, “that he’s more concerned about spending taxpayer dollars on his campaign trips than he is with saving American jobs or reducing prices at the pump.”

Republicans have also blocked some of Obama’s initiatives. Others have been failures, such as Solyndra, the bankrupt California solar firm that’s part of what Republicans call a “crony capitalism” investigation.

Solyndra, which filed for bankruptcy and laid off 1,100 workers in September, had received a $535 million taxpayer-backed loan guarantee from the Obama Administration. Republicans have unearthed emails showing that some in the administration were concerned with Solyndra’s finances, but the White House pushed for the loan anyway.

But Solyndra isn’t as big a concern to the average person as the cost of gasoline.  Though the economy appears to be improving, high fuel prices threaten to raise the price of groceries and home energy bills.

A national Quinnipiac poll released Thursday morning shows voters believe the economy is improving, but they don’t think Obama should be elected to a second term. Voters say that the economy has begun to recover, 54-43 percent, a 51-point shift in opinion since September 1. But Obama gets a negative 45-49 percent job approval rating, and 50-45 percent say he does not deserve to be re-elected.

The closer it gets to election time, the worse high gas prices are for Obama, said Brad Coker, pollster with Mason Dixon Polling & Research, which conducts surveys for the Miami Herald and Tampa Bay Times.

“Right now, it doesn’t matter what the price of gas is today or what the unemployment rate is today for the president,” Coker said. “It’s going to start to matter in the last week of September. That’s when people will really start to pay attention."

Obama’s speech had a defensive tone to it, pointing out that developing nations such as China and India are growing and consuming more fuel. More demand equals higher prices, Obama said, suggesting he wasn’t to blame

“Just think – in five years, the number of cars on the road in China more than tripled.  Nearly 10 million were added in 2010 alone,” Obama said. “Ten million cars in one year – think about how much oil that requires.  And those numbers will only get bigger over time.”

Obama said he will not “cede” solar-, wind- and battery-power technology to China.

Obama drew a measure of applause for crediting the City of Miami for powering its City Hall since 2008 with alternative fuel.

Unlike in 2008, when he called on Americans to get tune-ups and inflate their tires, Obama stuck to policies that Congress should enact, such as “clean energy tax credits that will lead to more jobs and less dependence on foreign oil green-energy tax credit.”

Obama, however, also subtly raised an issue that could raise fuel prices: Eliminating tax credits for the oil industry.

“Right now, four billion of your tax dollars subsidize the oil industry every year,” he said. “These are the same oil companies that have been making record profits off the money you spend at the pump.  And now they deserve another four billion dollars from us? It’s outrageous.  It’s inexcusable.”

Obama repeatedly said the “phony-election year promises” were easy to make. But the long-term commitment for alternative energy will eventually make the United States energy independent.

“There are no short-term silver bullets when it comes to gas prices,” he said. “And anyone who says otherwise is just not telling the truth.”