Planned Parenthood supporters rally at the Capitol against antiabortion bills 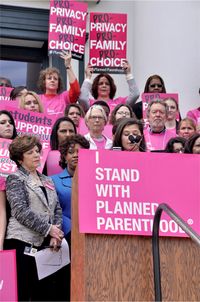 Senate Minority Leader Nan Rich, who's used to her objections on abortion measures getting steamrolled by her conservative colleagues, got a heroine's welcome from the crowd of about 100 Planned Parenthood staffers, volunteers and students assembled on the steps of the Old Capitol. She didn't get into specifics about the seven antiabortion measures moving through the Legislature this year, saying "they attack just about every aspect of women's health." We've written about them here and here.

Jones said 2 million Floridian women do not have health insurance. Of those, 31 percent are black and 38 percent are Hispanic.

Debate over abortion has tapered off this month but could resurge this week. No bills have been heard since the last week of January. The Senate is scheduled to hear for the first time a wide-ranging abortion proposal (SB 290 by Sen. Anitere Flores) in the Health Regulation Committee on Wednesday. Its counterpart, HB 277, sponsored by Rep. Rachel Burgin, is scheduled for a hearing Thursday.