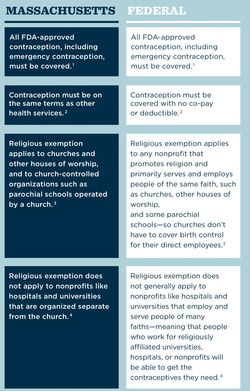 Mitt Romney and the rest of the Republican establishment are hammering President Obama for the healthcare law that requires insureres to provide coverage of contraceptions. It's a war on religion, they say, because Catholic providers don't believe in subsidizing Onanism (beware, Genesis has some dirty parts).

Now Obama's re-election campaign is hitting back. It has posted a blog entry that says Romney is being hypocritical:

"But the facts tell a different story. Just as he criticizes federal health reform based on the law he passed in Massachusetts, Mitt Romney is attacking the President for providing women with the same access to contraception and preventive health care services Romney did as governor. Our new infographic takes a look at how contraception coverage compares under the Affordable Care Act and the Massachusetts law Romney stood behind."

UPDATE: The Romney campaign finally responded, saying the attack is false: “Governor Romney stands with the Catholic Bishops and all religious organizations in their strenuous objection to this liberty- and conscience-stifling regulation. He is committed to repealing Obamacare entirely. On his first day in office, Mitt Romney will eliminate the Obama administration rule that compels religious institutions to violate the tenets of their own faith. We expect these attacks from President Obama and his liberal friends. But from Newt Gingrich and Rick Santorum, it’s a clear indication of desperation from their campaigns.” – Andrea Saul, Romney spokesperson....

·         In 2005, as Governor, Mitt Romney proposed eliminating ALL coverage mandates as part of health care reform, including the general contraception requirement, that was law before he was governor.

·         That is simply wrong. Newt Gingrich and Rick Santorum are once again peddling misinformation. In 2005, Mitt Romney vetoed an Emergency Contraception bill that would have made the Plan B pill available to young girls without prescription and with no age restriction. The legislature overrode Gov. Romney's veto.

·         Newt Gingrich and Rick Santorum are lashing out at their opponents, intentionally spreading misinformation, in an attempt to prop up their campaigns. It’s very sad – and it’s not going to work.

GOVERNOR ROMNEY HAS BEEN A STRONG DEFENDER OF RELIGIOUS LIBERTY

·         Governor Romney Sided With The Adoption Community Working To Ensure That Catholic Charities Could Continue Their Adoption Services. In 2006, Governor Romney Proposed Legislation That Would Have Allowed Catholic Charities To Continue Their Adoption Services.  "Calling it an issue of 'religious liberty,' Governor Mitt Romney today said he plans to file legislation to permit religious institutions to perform adoptions without violating the tenets of their faith.  Today, the board of Catholic Charities voted to stop doing adoptions because of state law which requires that gays be given equal consideration for the placement of children. Because of the Church’s teaching, Catholic agencies may not provide adoptions to gay parents.  'This is a sad day for neglected and abandoned children. In this case, it’s a mistake for our laws to put the rights of adults over the needs of children. While I respect the board’s decision to stay true to their principles, I find the current state of the law deeply disturbing and a threat to religious freedom,' said Romney."  (Office Of Governor Mitt Romney, "Defending Religious Liberty, Romney To File Bill Exempting Religious Institutions From Gay Adoption Requirement," Press Release, 3/10/06)

The liberal DailyKos, meanwhile, has linked to a poll suggesting that rank-and-file Catholics aren't really bothered by The Pill Rule.