Sen. John Thrasher denies that he is trying to strike a deal that would allow him to become Senate president in two years instead of Andy Gardiner. No decisions have been made, and Senators talking about who their future leaders could be isn't cause for concern, Thrasher said. 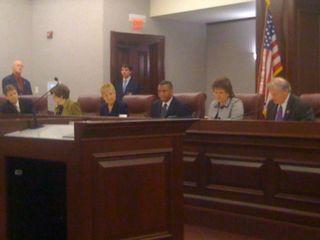 The St. Augustine Republican chaired a brief committee meeting Wednesday where rival Gardiner is also on the panel. As you can see in the picture, Gardiner (far left) put some distance between himself and Thrasher (far right, with empty seats closer to him not pictured). Gardiner, R-Orlando, left immediately after the meeting ended, but Thrasher stuck around to answer a few questions.

What has been going on behind the scenes? "It's a common discussion in the Senate. It's a lot of discussion. Everybody's comfortable about where they are, and we'll just continue to move on. I don't see any real issues developing one way or the other."

Are you striking a deal to replace Gardiner? "I'm not trying to strike any deals with anybody."

Would you be a better fit for the Senate presidency in two years? "That's up to the senators to make that decision and not me."

Are you still supporting Gardiner? "We'll talk about it. But no, if I'm running I'm supporting myself. But it's a long way to go. These are preliminary discussions. Nbodody's really locked down to anything, and we'll see what happens."

What about concerns that these discussions could set the wrong tone for the final weeks of session? "Everybody wants to bring the session in on time. I think we all want to go out of here with a very positive feeling about the session. Certainly we want to be supportive of the president and where he's trying to get us to and Sen. (JD) Alexander on the budget. So I think all of those things are really what our primary goal are. This is collateral stuff. It's not that important to get us through the session."

Is there a Thrasher/Joe Negron ticket lining up against Gardiner/Jack Latvala? "I don't know about any of that. I've not had any conversations about anybody forming a team or things like that. This is early discussions and we'll see what happens. We got a long way to go. We got a summer to go through. We got elections. We got all that to go through."

Then why discuss the Senate president race now? "People start talking about it. That's the history of the Florida Senate. These are not wall flowers here. Everyone has opinions about everything over here. These kinds of discussions go on all the time. It's not just started now. It's actually probably gone on for a long time."