« On integrity, Florida politics gets a C- | Main | White House condemns detention of "Ladies in White" in Cuba » 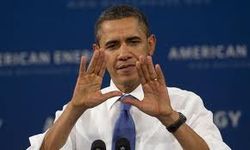 In touting what it sees as the successes of the Affordable Care Act/ObamaCare, the White House sent out a press release with a double swing-state screw-up: It confused Florida's University of Miami with Ohio's Miami University. Well, perhaps it's understandable. It's not like President Obama recently visited UM and made "The U" gesture. Oh....wait...(more here)

WHAT:           Secretary of Health and Human Services Kathleen Sebelius will join President of Miami University, Donna Shalala, to discuss how the passage of the health reform law, the Affordable Care Act, has provided access to critical consumer protections for women.  Women have been disproportionally impacted by insurance company abuses such as discrimination based on pre-existing conditions, coverage recessions and lifetime limits on care; however, because of the Affordable Care Act, being a woman is no longer considered to be a pre-existing condition.  Secretary Sebelius and President Shalala will hear from Florida women who have been able to gain more control over their families’ health care with expanded options for more affordable health insurance, and they will highlight additional protections in the law including increased access to critical preventive services like cancer screenings and well-women visits.