Seeking candidates to run for Miami-Dade County Commission, Miami auto magnate Norman Braman is trying to persuade state Rep. Luis Garcia to quit his run for Congress to challenge Commissioner Bruno Barreiro instead. That could create an opening for another Democrat -- former Miami-Dade Mayor Alex Penelas, anyone? -- to run against Republican U.S. Rep. David Rivera.

Penelas says he's still mulling over his options and leaning against a run. Garcia says he'll make up his mind in the next week. Read on:

After spearheading last year’s historic mayoral recall, Miami businessman and civic activist Norman Braman is lining up a slate of candidates “interested in reform’’ to challenge four powerful Miami-Dade commissioners and fill a fifth open seat in the August race.

Braman told The Miami Herald Friday he is urging state Rep. Luis Garcia to abandon his bid for U.S. Congress and to go up against District 5 Commissioner Bruno Barreiro — a move Garcia confirmed he is weighing.

Braman also is actively soliciting prospective candidates to run against Commissioners Barbara Jordan in District 1, Audrey Edmonson in District 3 and Dennis Moss in District 9, and is in talks with Juan Carlos Zapata about supporting him in his bid to fill the District 11 seat that will open because Commissioner Joe Martinez is running for mayor.

FAMU trustees change course on anti-hazing committee, saying it must meet in open after all

Florida A&M trustees decided Friday to reverse course -- again -- on the charge of its outside anti-hazing committee.

Their decision means the committee must operate within Florida's Sunshine Laws for public meetings, a requirement the outside panel successfully argued last week would be too burdensome for turning around the research FAMU wants by the fall semester.

More than half of the experts on the committee will quit as a result of the reversal, Judge Stephen Robinson, chairman of the anti-hazing panel, warned before the vote.

“I took it as a threat when I hear resignations if they’re not allowed to do what they asked,” Montgomery said. “To me that’s kind of a child not getting their way and saying I’m going to take my toys and go home. I’d rather move on because I believe it sets a dangerous precedent... So, you know, go ahead and resign. But I don’t think as a board we should be held hostage under the threat of resignation of anyone.”

Continue reading "FAMU trustees change course on anti-hazing committee, saying it must meet in open after all" »

Rep. Ron Saunders, the House Democratic leader, made it official Friday and filed papers to withdraw from his House seat and on Monday will file to run in the open Senate seat, District 35 under the new Senate map.

Saunders, a Key West native, first ran unsuccessfully for state Senate in 2004 in a race against the elder Bullard that got quite nasty. Direct mail pieces were sent against Saunders that portrayed him as someone trying to "turn back the clock" because he was a white man taking on a black woman. One mail piece depicted scenes of police hosing down civil rights protestors from the Birmingham riots of the 1960s.

The hiring front remains a frustrating place to be in Florida.

New numbers show unemployment inching down statewide, and definite signs of life from hiring managers as payrolls continue to expand in South Florida. But the pace mostly remains sluggish, without the big burst of new jobs needed to make a dent in unemployment rates that remain near historic highs.

Broward’s unemployment rate dropped from 8.3 percent in January to 7.9 percent in February, bringing it below the 8 percent mark for the first time since January 2009. The numbers that determine the rate also were encouraging: Broward’s employment rolls increased, as did the number of job seekers.

However, those are raw numbers and don’t adjust for the economy’s natural seasonal expansion in February.

The Florida Senate will rule on a punishment for Sen. Jim Norman, R-Tampa, who faces charges that he failed to give timely disclosure of a $500,000 gift from a local business man to his wife.

The Florida Commission on Ethics agreed Friday morning to forward the case to the Senate, which could impose a reprimand, a fine or a removal from office. The panel found probable cause in February to show Norman should have disclosed the gift when he was running for Senate in 2010.

Collins Center taps Ann Henderson to be its new director 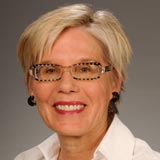 With its management stabilized and its financial affairs in order, the Collins Center turned to the University of Florida to find the person to lead what is considered one of the state’s most well-respected think tanks.

The center, named after former Florida Gov. LeRoy Collins, announced this week it had hired Ann Henderson as president and CEO. She has been director of the Graham Center for Public Policy at the University of Florida since 2009. She begins her new job on May 16.

For Henderson, the job at Collins offers a chance to return a favor.

Twenty five years ago, when she was a cultural affairs director at the U.S. Embassy in Tegucigalpa, Honduras, former Gov. Collins urged her to move to Florida to become head of the Florida Humanities Council. She accepted.

“Joining the Collins Center is an opportunity for me to repay his generosity to me,’’ Henderson said. “He is just a hero in my book. I want the Collins Center to equal to the governor’s legacy and what he did for our state.” Story here.

Posted by Mary Ellen Klas at 10:37 AM in Florida, Florida Politics | Permalink | Comments

From the National Review Online (which also asks Republican Sen. Marco Rubio about his endorsement of presidential candidate Mitt Romney and ObamaCare):

NRO: I saw that you are offering what is being characterized as a revised or reformed version of the DREAM Act, and I notice the editors of the New York Times didn’t like it. I’m sure their lack of approval stuns you and has you all torn up inside. Could you walk us through your proposal and how it differs from previous versions?

Rubio: Well, we don’t have a formal proposal yet; all we’ve discussed is concepts. I think the vast majority of Americans understand that if you were four years old when you were brought here, you grew up in this country your whole life, and you’re now a valedictorian of a high school or are a high-achieving academic person, and have much to contribute to our future, I think most Americans, the vast majority of Americans find that compelling and want to accommodate that.

Posted by Marc Caputo at 10:13 AM in Marco Rubio | Permalink | Comments

As if the Trayvon Martin shooting couldn't get any more tragic or weird, there's an @KillZimmerman Twitter handle that hasn't yet been removed after 5 days.

But @RealFerrellWill? Well, Twitter had to suspend that after the impersonator of the actor tweeted, among other things "R.I.P. Trayvon Martin... For every R-T this tweet gets, $1 will be donated to the #TrayvonMartin Foundation, which helps counteract racism.”

Conservative websites and commentators from The Daily Caller to Michelle Malkin have questioned why the @KillZimmerman is up and and tweeted about it rather extensively. Yet it remains.

Meantime, a group that calls itself the New Black Panther Party has called for a $10,000 bounty on 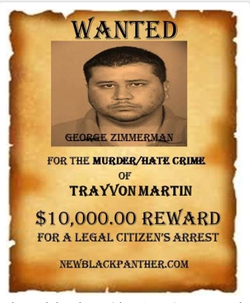 Zimmerman. (In a somewhat ironic twist, a head of the organization was recently arrested in Georgia on gun charges) Someone, under the name of the party, posted a dead-or-alive bounty poster of Zimmerman. Gov. Rick Scott condemned the apparent call to violence. And so did Trayvon's parents.

Trayvon's parents and their lawyer condemned violence of the sort suggested by the New Black Panthers, which had posted a $10,000 bounty for the "capture" of George Zimmerman.

"We want you to protest, we want you to rally," Trayvon's mother, Sybrina Fulton, said Tuesday at a press conference in Washington D.C. "But we want to make sure that it's peaceful."

"We don't condone anything of violence or anything of the sort," said the family lawyer, Ben Crump. "We don't want anyone making an arrest of George Zimmerman but the lawful authorities." His parents "only want justice. No less no more," Crump said.

Some will doubtless suggest some or all of this is the work of agents provocateurs, those who would infiltrate a movement and purposely undermine it by getting it to spin out of control. But, in trolling the internet, it seems there are some way-too-angry people out there who are looking to shoot first and use race as an excuse.

Some aren't even on the internet. They might be walking around a gated community near you right now. Posted by Marc Caputo at 9:59 AM in Rick Scott | Permalink | Comments

The father of Eric Brody, who was struck by a speeding Broward County Sheriff and severely injured, gave thanks Thursday for the $10.75 million claims bill passed by the Legislature and signed by Gov. Rick Scott.

The bill was one of nine Scott signed into law. Most jury awards against government entities or employees have to be approved by the Legislature if they are more than $200,000. Scott's signature marks the end of the Brody family's years-long political and legal battle.

“Today, Governor Rick Scott allowed the Relief of Eric Brody by the Broward County Sheriff's Office (SB4) to become law. We are so grateful to him, and to all the champions who helped support us over the last 14 years.

One of the most high-profile bills will go to the family of Eric Brody, who was permanently and severely injured 14 years ago when a speeding Broward County Sheriff plowed into his car. The Brody family has been travelling to Tallahassee for four years running trying to collect on a multi-million jury award. The claim signed Thursday is worth about $10.75 million.

Most jury awards against government entities or employees--school bus drivers, hospital workers, police officers, and the like--have to be approved by the Legislature if they are in excess of $200,000.