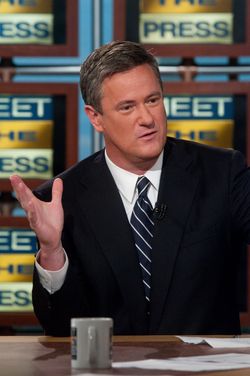 Joe Scarborough, the former Republican Pensacola-area congressman and current host of MSNBC's Morning Joe, just took a brickbat to the authorities overseeing the Travyon Martin shooting. Scarborough, like almost every other observer, said he was shocked that Sanford Police Chief Bill Lee and State Attorney Norman Wolfinger have neither arrested nor charged George Zimmerman in the shooting death of the 17 year old on Feb. 26.

"They are not worthy of the public trust," Scarborough said. "They acted shamefully. They should be forced from office."

Scarborough also called on his fellow Republicans who control state government. "I know people watch this show in Tallahassee. I know Pam Bondi watches this show," Scarborough said of the Florida attorney general. "They better move in fast in this case."

So far, they haven't.

Gov. Rick Scott initially refused to get the Florida Department of Law Enforcement involved in the probe but on Monday night called in the state police to assist in the investigation just as the US Department of Justice and the FBI announced their pending involvement.

Bondi said she wouldn't interfere. But, she said in a written statement issued yesterday, that she's monitoring the case.

“I am both devastated and deeply troubled that young Trayvon Martin lost his life in a shooting," she said.  "When someone loses his life at the hands of another, there cannot be any questions surrounding the circumstances of the death.

“I have spoken to FDLE Commissioner Bailey, whose agency is now involved, and I know that a complete and thorough review of the facts will be conducted.  FDLE has skilled investigators of the highest caliber, and no stone will be left unturned in this investigation. While the Seminole County State Attorney’s Office has the sole authority regarding a charging decision by law, I will remain vigilant in ensuring that questions are answered.”

The state attorney has announced he'll empanel a grand jury on April 10. The police chief, who is facing calls from the local NAACP to resign, has said for days that his department couldn't arrest Zimmerman because there was no evidence to dispute his version of events -- that Trayvon attacked him.

However, recently released 911 tapes and the statement from a friend of Trayvon's who said she spoke on the phone with the teen just before he was shot, cast doubt on Zimmerman's claims. Also, the framers of the state's self-defense law nicknamed "Stand Your Ground" said they believe Zimmerman deserves to be arrested.

It appears that, in the limited investigation after the shooting, police did little to double-check Zimmerman's story. They didn't immediately contact Trayvon's father -- even though they had the teen's cell phone. But they drug tested the dead child -- not Zimmerman.