A $1 billion program to help struggling homeowners pay their mortgages is getting a massive overhaul, potentially opening the door for thousands of previously ineligible Floridians to receive aid.

Since last year, only about 5,500 homeowners have received aid from the Florida Hardest Hit Fund, and thousands of Floridians have been rejected or discouraged from applying due to the program’s strict eligibility rules. Florida Housing Finance Corporation, which runs the program, moved to loosen those rules Friday.

The program was slated to help tens of thousands of homeowners, but so far only about 5,500 have qualified. Only $101.8 million of the $1 billion has been reserved for homeowners so far, and even less than that has actually been paid out. After reviewing the program’s first year performance, FHFC pushed for aggressive changes, including scrapping the 6-month cap on mortgage delinquency (translation: Homeowners who are more than six months behind on their mortgage can qualify).

FHFC also raised limits on how much aid homeowners could receive, doubling aid to unemployed borrowers to $24,000 and tripling mortgage “catch-up” assistance to $25,000.

“It’s going to open a lot more doors for homeowners,” said Mordy Lafortune, of Neighborhood Housing Services of South Florida. “In the long run it’s better to stabilize the economy itself and homeowners.

Last year, the Miami Herald reported on how the program's strict requirements would disqualify a lot of homeowners off the bat. According to FHFC data, 12,516 homeowners were rejected from the program, and another 9,542 withdrew their applications. Only 5,540 applicants were approved.

Ray Payano, a Cutler Bay homeowner who told the Herald last year that he would be applying for the program, said he would take another look now that the requirements have been eased.

He struggled in 2010 to keep up with the mortgage after he and his wife were laid off, had a baby and exhausted their savings all in the span of a year. He's now working and can afford his $1,450 mortgage, but could use some help making up the overdue amounts. Under its new rules, the Hardest Hit Fund could provide him up to $25,000 to get caught up on his mortgage, provided that his bank agrees.

Here’s a breakdown of the various changes that FHFC is proposing. The U.S. Treasury Department has to sign off on them. 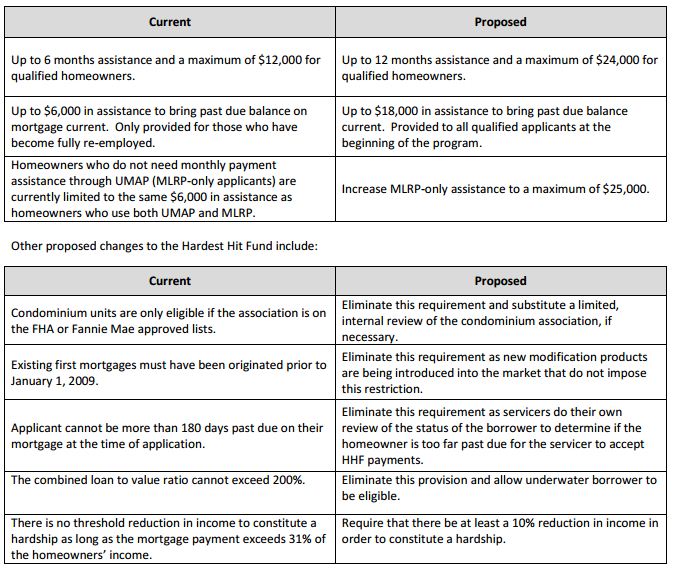