Rick Scott's Facebook feature of Miami Herald headline: not quite 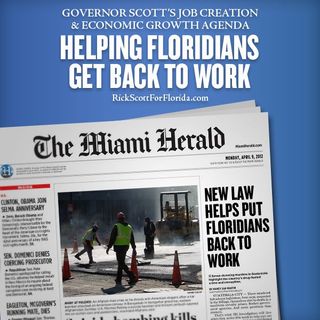 The Miami Herald headline on the Facebook page of Gov. Rick Scott shouts: "New law helps put Floridians back to work." It is dated Monday, April 9 with the inexplicable dateline of Guatemala City.

It was a fake headline pasted over a real story by Herald reporter Nancy San Martin from the Herald's International edition, dated March 5, 2007. The real headline read: "Murders highlight rise in crime in Guatemala." Download HeraldInternational_030507

Rick Hirsch, managing editor of the Miami Herald, alerted the Republican Party of Florida of the fake headline and asked them to take it down. The party pays Harris Media to manage the governor's Facebook page.

Brian Hughes, RPOF spokesman, said he was not aware of the post but had it removed immediately. "It was overzealous graphics,'' he said.

"The posting of a fraudulent front page of The Miami Herald is unacceptable,'' Hirsch said. "Not only is it a fraud on the public, but it is trademark infringement for use of our masthead in a fake edition, and copyright infringement for those portions of the front page that were not fabricated."

Texas-based Harris Media has managed the governor's Facebook account since the 2010 campaign and the company touts its success at promoting the governor through the social media site on its web site. Since Scott took office, the RPOF has taken over payments to the company, paying it more than $68,000 to handle the Facebook and Twitter accounts just in the first 12 months the governor was in office.

The governor's Facebook post was clearly intended to promote the op-ed by Workforce Florida chief Chris Hart IV that appeared on Monday, April 9. It read: "ICYMI: Check out the editorial in yesterday's Miami Herald: 'New Law Helps Put Floridians Back to Work.' SHARE this good news with your friends."

There were 71 likes to the Facebook post, but nobody seemed to question the curious juxtaposition of the dateline and the headline. It was called to The Miami Herald's attention by Random Pixels blogger Bill Cooke.