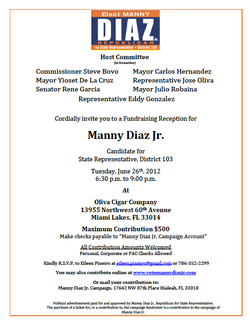 HD 103 is one of those Miami races to watch, pitting Manny Diaz Jr. against Miami-Dade School Board member Renier Diaz de la Portilla, who entered the race late and trails Diaz about $30k to $40k cash on hand as of the last reporting period, according to the state elections division.**

** Update: since posting this, Diaz de la Portilla complained that the state numbers are wrong because they don't reflect his school board money contributions, which has transferred to his state race. Factor that in, he says, and he's leading Diaz in fundraising $78,750 to $52,576. Also, he says, he has been endorsed by former Congressman Lincoln Diaz Balart, which trumps Diaz's endorsements, he says.