Congressman Connie Mack denies a report that he called a Pensacola man "a jacka--" at a gas station event Thursday promoting his petition to build the Keystone XL pipeline.

"He might have been, but that's not what I said," Mack said after a similar event at a Tallahassee Shell station Friday. 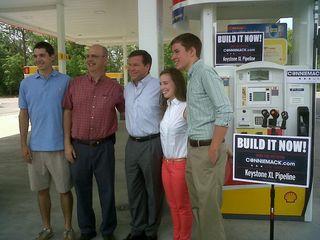 The Pensacola man, Barry Goodson, was apparently skeptical of the environmental impact of Keystone, calling Mack's claims about it "bogus" after pressing the Fort Myers Republican about it, according to a Friday post on RicksBlog.biz. See this photo of the man, decked in Gators gear, confronting Mack.

Mack's Tallahassee event lasted about five minutes and attracted few supporters. After bashing President Barack Obama and Sen. Bill Nelson for siding "with the environmentalists over the people of the state of Florida and over the American people," he took questions from reporters and a photo with the owner of the Shell station, Charles Rooney, and his family.

A reporter asked what he thought of U.S. Sen. Marco Rubio's Dream Act proposal, which would create non-immigrant visas for children of illegal immigrants (but not a path to citizenship).

"Today we're talking about the Keystone pipeline. But I think Marco has done an excellent job of being a leader on issues, and I haven't had the opportunity to look at what Marco's Dream act is, but I know him to be a strong conservative who understands amnesty is not the right way to go," he said.

Mack explained why he reversed his position on oil drilling from several years ago. PolitiFact Florida gave him a Pants on Fire! for claiming last month, "I have always said that I would be for drilling."