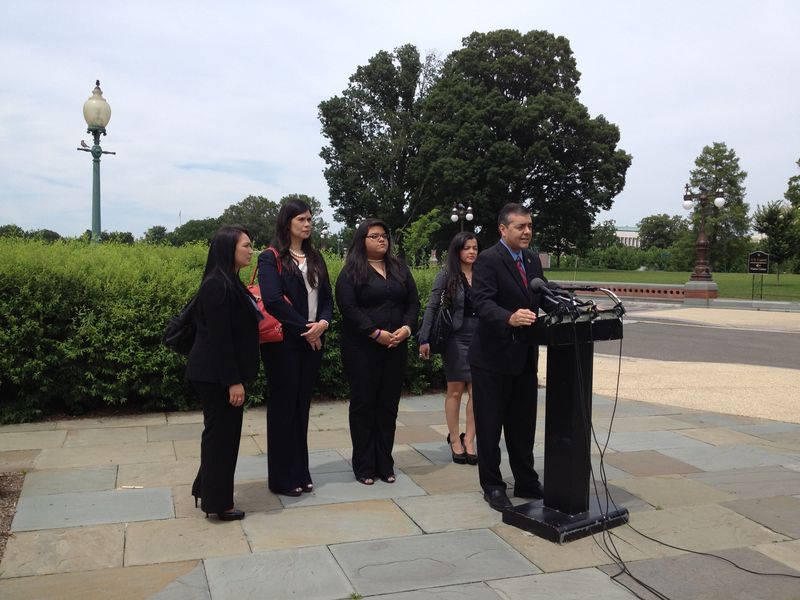 Rep. David Rivera, R-Miami, is proposing an alternative plan to the DREAM Act, the legislation that allows kids who came to this country with their parents illegally to stay in the United States under certain conditions.

Rivera introduced his bill this week, and was joined Wednesday by Daniela Pelaez, the 18-year-old North Miami High School valedictorian who was threatened with deportation. Pelaez's lawyer, Nera Shefer, and her sister, Dayana, also attended the press conference for what's known as the Studying Towards Adjusted Residency Status -- or STARS Act.

Rivera has already introduced legislation to allow young, undocumented immigrants who came to this country through no fault of their own to stay in the U.S. if they serve in the military; the STARS Act would allow kids who are going to college to stay in the country.

The bill's prospects are unclear. Rivera was recently cleared of a state inquiry but still faces FBI and IRS probes -- which makes him an awkward ally for other House members interested in immigration reform.

He also must get the blessing of Rep. Lamar Smith, R-Texas, the chairman of the House Judiciary Committee. Smith has said previously he wouldn't hear the DREAM Act in his committee. Rivera said Smith hasn't said yes, but he also "has not told me 'no.'"

Here's Rivera's description of the proposal: "The bill will allow undocumented immigrants who are 19 years of age or younger, or 21 years of age or younger and have been granted voluntary departure, arrived in the United States before the age of 16, and have maintained residence in the United States for at least the previous five consecutive years, the opportunity to adjust their residency status if they achieve a degree from an accredited four year institution of higher education and meet certain other criteria."

Like a similar as-yet-unfiled idea, from fellow Florida Republican, Sen. Marco Rubio, it does not put the students on a path to citizenship. They wouldn't be eligible to start that process until they have completed their college degree.

Pelaez, who is going to Dartmouth College in the fall, met with Smith herself to persuade him to consider the bill. She and her sister have started a foundation to help boost efforts to get legislation passed that benefits young people like themselves. And she's hopeful other kids will benefit from their efforts: "A couple months ago, I was going to get deported," she said. "And look where I am today."