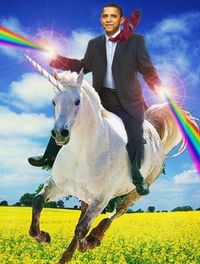 Barack Obama couldn’t have been clearer.

“I favor legalizing same-sex marriages, and would fight efforts to prohibit such marriages,” he said.

But he didn’t say this in the now-famous ABC White House interview Wednesday that has the national news media in a tizzy as they parrot his buzzword about his “evolution.”

Obama said it about 16 years ago, in writing, on a gay-publication questionnaire. At the time, in 1996, he was running for a state Senate seat in Chicago. The district was liberal. It was an easy stance to take.

But two years later, as he gazed at higher office, Obama began backing off that stance, the Washington Post notes in a good story today. By 2004, the then-U.S. Senate candidate abandoned using the word “marriage” but said he favored “civil unions.”

By the time he began running for president in 2008, Obama was against it.

That’s not evolution. That’s a flip-flop-flip-flop. It's a reverse of a reversal.


The Washington Post goes on to say that the “benefits from the timing of Obama’s reversal were clear — he needed to alter a story line that was painting him as indecisive and calculating. And the announcement has spurred gay donors to give even more to Obama’s reelection campaign.”

So it brings in money, appeases the liberal base and gets him favorable media coverage. That sounds pretty calculating.

Consider: Some inconsistencies remain in Obama’s stance. Though he thinks gays and lesbians should have the right to marry, he still says he views it as a states’ rights issue at a time when many states are moving to tighten prohibitions on same-sex unions.

Specifically, Obama's announcement came the day after North Carolina voted to ban same-sex marriage. So he risked zero political capital. Still, when Obama made his announcement, gays activists cheered him (one tweeted out the photo up top).

And while we’re all talking gay marriage, polls indicate that about 1 percent of voters really rate this as a top issue. Consider what’s really going on politically in this Associated Press story:

Americans are growing more pessimistic about the economy and handling it remains President Barack Obama's weak spot and biggest challenge in his bid for a second term, according to a new Associated Press-GfK poll.

And the gloomier outlook extends across party lines, including a steep decline in the share of Democrats who call the economy "good," down from 48 percent in February to just 31 percent now.