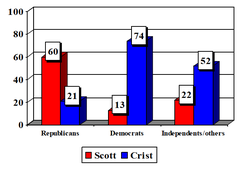 I just completed the spring installment of the quarterly Florida Omnibus SurveyTM for my various clients, and decided to also include a question to test a hypothetical gubernatorial match-up between Republican Rick Scott and Charlie Crist, running as the Democrat Party’s nominee. The results indicate that, overall, 34% of voters in Florida would vote to re-elect Governor Scott, while a plurality of 48% would opt for challenger Crist, running as a Democrat. The remaining 18% of voters were either undecided or volunteered that they prefer other candidates. As the graphic insert illustrates, while Scott leads among Republican voters, his net advantage is only 39%, while Crist has a net advantage of 61% among Democrat voters and 30% among independents and voters of other minor parties or those who are unaffiliated.

While there is still more than 2 years until the next gubernatorial election in Florida, and the candidate field could change in many ways, including the entry of life-long Democrats, who could serve as spoilers, the data suggests that such a hypothetical match-up has the potential to dramatically transform the political environment. Please note that this question was not funded or commissioned by any candidate, organization, association or committee. It was included in the survey because I believe that this is a topical matter that may be of interest to people with whom I work and professionally associate. If you have any questions about this data or would like to discuss it, please feel free to call me at 813-283-2665

This information is based on survey data that was gathered through telephone interviews that specially-trained opinion research interviewers conducted with 802 randomly-selected registered voters in the State of Florida who had valid residential or cellular telephone numbers and recent histories of voting in past even-year general elections. The interviews were performed during the period of May 23, 2012 through May 25, 2012. The overall estimated margin of sampling error is +/- 3.46%, based on a confidence level of 95%, although it varies for each individual question. This means that if this survey was repeated, 95 times out of 100 the results would be within plus or minus 3.46% of those provided herein. Adjustments were made to weight the results toward geographic and demographic characteristics of the state, in order to account for under- and over-sampling that normally occurs as a result of the random selection process, to ensure that all major subgroups are represented in proportion to their actual percentages of the electorate.