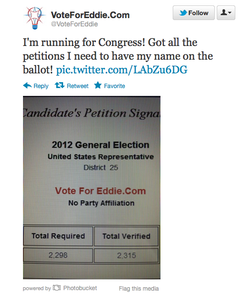 So Gonzalez did the logical thing. He legally changed his name to “VoteForEddie.com.”

Apparently, "Don'tVoteforMarioDiazBalart.com" was already taken. Gonzalez.....er... VoteForEddie.com  petitioned a Miami-Dade judge to have his new name on the ballot and, viola, it happened and the Associated Press noticed. See AP story here.

The stunt aside, there's some precedent for people running on the ballot under different names. Just ask Cornelius McGillicuddy and John Ellis Bush.

Still, he's the first candidate in Florida to be named for a website. He has a Twitter handle as well, @VoteForEddie.com. Below is his campaign video in which he promises  to steer gas tax money into an effort to end our "economically crippling oil addiction."

Paging Solyndra. Oh, and the road-builder lobby as well.

The disclaimer is priceless: "I am VoteForEddie.com and I approved this message."