Connie Mack: I don't need to debate Republicans in Senate primary. It's over 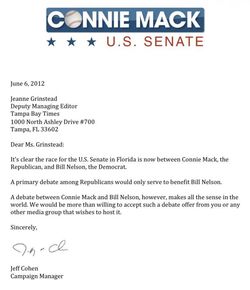 Basking in high poll numbers and the major endorsement of Gov. Jeb Bush, Connie Mack has declined an invitation to participate in a statewide prime-time televised debate, effectively declaring the GOP U.S. Senate primary over.

"It’s clear the race for the U.S. Senate in Florida is now between Connie Mack, the Republican, and Bill Nelson, the Democrat," Mack campaign manager Jeff Cohen wrote in a letter to Jeanne Grinstead, deputy managing editor of the Tampa Bay Times.

Grinstead is organizing the July 26 debate with co-hosts Bay News 9 and Florida PBS and its member stations. The primary is Aug. 14. But Florida voters won't have an opportunity to hear from Mack, who has a big lead in the polls.

"A primary debate among Republicans would only serve to benefit Bill Nelson," Cohen wrote adding that a debate between Mack and Nelson "makes all the sense in the world."

Mack has faced aggressive questions over his credentials by rival George LeMieux. Other candidates include Mike McCalister and Dave Weldon.