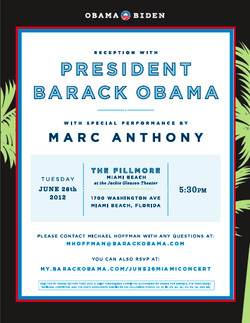 In the battle for the Hispanic vote, it's tough to top this Barack Obama fundraiser: a June 26th performance by pop star Marc Anthony at the Jackie Gleason Theater in Miami Beach.

Obama could use every dollar. After Republicans howled last year that the president would ultimately raise $1 billion (something his campaign denied), Republican challenger Mitt Romney and conservative billionaire-backed Super PACs are well on their way to raising $1 billion or more.

Anthony's support for Obama is no secret. He greeted Obama at the airport last year during the president's trip to Puerto Rico. Anthony and his ex, Jennifer Lopez, could be spotted from time to time in Miami where they owned (still own?) a Brickell Ave. condo.

"Latinos are a force that can and will help decide this election," Anthony says. "President Obama is on our side.... The president has our back. So it's time to let him know we've got his."