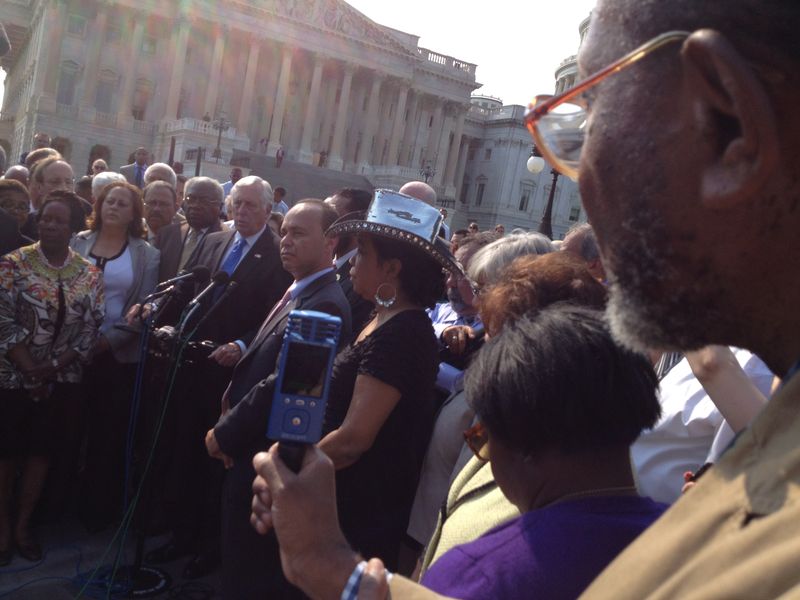 Members of the Congressional Black Caucus were joined by many fellow Democrats Thursday in walking out on a House Republican-led vote to hold U.S. Attorney General Eric Holder in contempt of Congress over the Fast and Furious controversy.

Among those supporting the walk out from South Florida: Reps. Debbie Wasserman Schultz, D-Weston; Alcee Hastings, D-Miramar; and Frederica Wilson, D-Miami. Here are their statements:

Wasserman Schultz: "Today I opposed the latest act of overt political theater staged by House Republican lawmakers who have made it clear that they would rather cast votes aimed at damaging the president instead of helping the American people. I joined my colleagues in walking off the House Floor to strongly oppose Republican lawmakers’ outrageous attempt to hold Attorney General Eric Holder in contempt of Congress. This is just the latest effort to distract and delay from the task at hand - creating jobs and strengthening the middle class.

"The Republican leadership has acknowledged that there is no evidence to suggest the Attorney General authorized, condoned, or knew about gun walking or engaged in a cover-up and as such, today’s vote was both unwarranted and unprecedented.

"Despite Democratic efforts to hold a real investigation, Chairman Darrell Issa has refused 10 separate Democratic requests for a hearing with Ken Melson, the former director of the agency in charge, the Bureau of Alcohol, Tobacco, Firearms and Explosives (ATF). He has also refused to grant a single Democratic witness request during the entire 16-month investigation. This flawed investigation is yet another example of political theater and prevents concrete action to create jobs and build an economy built to last."

Hastings: “It is contemptuous that Republicans decided to cast a stain on this institution by finding the United States Attorney General in contempt of Congress.  No Cabinet official in the history of this country has ever been held in contempt.  I warned yesterday that if we did this, history will judge us harshly.  And it will.

“Brian Terry, a U.S. law enforcement agent, was killed. That is a terrible tragedy for his family and our country. I am eternally grateful to those law enforcement officials who put their lives on the line to protect the nation. However, this vote today was not about what happened to Agent Terry.  It was political, plain and simple.

“We need to address the doubling of student loan interest rates in this country, and yet, Republicans have made it their priority to pass a measure that does nothing to help struggling Americans. Our nation’s transportation infrastructure is in serious need of repair, and yet, we have not passed a long-term surface transportation reauthorization bill.   Americans need jobs to pay their bills, provide for their families, and keep their homes.  And yet, House Republicans believe that our time is better spent playing politics with this contempt vote, rather than actually creating jobs for the millions of Americans who are out of work.

“Today’s vote was nothing more than a partisan political circus and House Republicans should be ashamed of themselves."