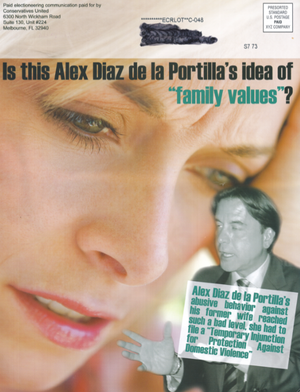 The state House District 112 race looks like it's the most-vicious in Miami, if not Florida, as former state Rep. Gus Barreiro squares off against former state Sen. Alex Diaz de la Portilla. Both are Republicans. Both hail from political families.

And both sides are eviscerating each other.

This week, two Republican blogs endorsed Diaz de la Portilla and took Barreiro to task for, among other things, getting fired in 2009 from the Department of Juvenile Justice over his apparent use of a state computer to troll the singles-and-swingers Adult Friend Finders dating website, which left hundreds of pornographic pictures on his laptop. Barreiro said he was set up.

TEA Party Miami' Eric Von Tausch compared the former Representative with Colorado Joker Killer James Holmes by posting a blog with this headline: "WHAT DO GUS BARREIRO AND THE AURORA MASS MURDERER HAVE IN COMMON?"

Republican activist Christian Camara wrote on his Reaganista blog that Barreiro is a "chivato" (basically a rat) for his role in filing a 2006 complaint against then-fellow Republican Rep. Ralph Arza for allegedly using a racial slur amid a squabble with then-School Superintendent Rudy Crew, who's reviled by some in the exile community for refusing to ban the book Vamos a Cuba, viewed as a work of Castro propaganda.

Also, some voters have received robo-calls in the district calling Barreiro a "pornographer." 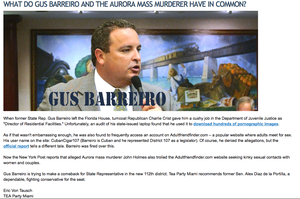 Barreiro supporters have been ripping Diaz de la Portilla apart at the same time. A shadowy Melbourne-based political committee called Conservatives United has sent at least two mailers in the district highlighting Diaz de la Portilla's tough and messy divorce with lobbyist Claudia Davant, who is pictured in one of the flyers. In another, a stand-in female model is depicted weeping and distraught.

"I did not authorize nor do I condone anyone using me personally for political purposes," Davant said. "I am horrified." She said she's having a lawyer send the committee a cease-and-desist order over the unauthorized use of her likeness. Davant isn't the only person made queasy by the mailers. One constituent told us she had to throw away the mailers so her kids didn't see the disturbing images.

Barreiro said his campaign had nothing to do with the mailers. And he said Diaz de la Portilla "will do anything to win. He has no respect." Said Diaz de la Portilla: "These people are outright liars. What can you expect from a desperate man who is a known deadbeat dad and a pornographer? I suspect he's simply trying to cover up his lack of moral character."

Diaz de la Portilla's divorce became news in 2010 when Davant  received a now-lifted temporary restraining order against him that accused the then-Republican state Senate leader. The mailer excerpts from her court filing in which she said she feared for her life and worried about his temper when he drinks. Then, last year, a Tallahassee judge issued an arrest warrant for Diaz de la Portilla after he refused to give Davant one of their dogs -- named Priscilla and Elvis -- as they divided their property in the divorce. The arrest warrant has been stayed as Diaz de la Portilla's brother, attorney and state Sen. Miguel Diaz de la Portilla, fights the matter at the First District Court of Appeal.

Almost as shocking as the charges and countercharges is that Barreiro and Diaz de la Portilla actually worked well together in the Legislature. Obviously, that was before they ran against each other. Just imagine what either side might do to the Democrat (Jose Javier Rodriguez squares off against Alex Dominguez) after the Aug. 14 primary.

Posted by Marc Caputo on Wednesday, Jul. 25, 2012 at 11:26 AM in Miami-Dade Legislators, Miami-Dade Politics | Permalink