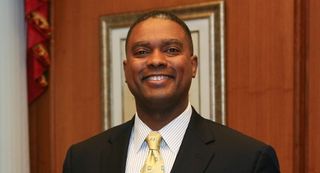 "After much contemplation and discussion with my family, I want to inform you of my intention to resign as the Florida Commissioner of Education effective August 31, 2012,'' Robinson wrote in a letter to Gov. Rick Scott. "It has been an honor to serve as Commissioner during an unprecedented period in the history of school reform in the state of Florida."

Since Robinson was lured to Florida by Scott from Virginia, where he was that state's school chief, he has been at the helm of some of the most rocky revisions to the state's Florida Comprehensive Assessment Test-based school grading system and the introduction of the Common Core Standards.

He was appointed by the Board of Education in May 2011 which launched a series of reforms that included strengthening achievement standards and modifying curriculum. During that time, Robinson has come under fire from all directions -- from school administrators who blamed him for lower than expected FCAT writing scores and some miscalculated school grades to a prominent member of the Board of Education, Coral Gables lawyer Roberto Martinez, who chastised him for failing to communicate with the board about many of the FCAT changes.

The governor and the head of the Board of Education, Kathleen Shanahan, however, stood by him. Shanahan said she and the governor were surprised by Robinson's decision which she said was "completely personal."

"He had the full support of the governor and the board,'' Shanahan told the Herald/Times. "We've been through the most significant reforms in the last 10 years over the last 10 months. I'm sad to see him go."

Robinson, who has been on the job one year, formerly was the secretary of education for Virginia and previously served as the president of the Black Alliance for Educational Options, a pro-school choice group. Robinson holds an undergraduate degress from Howard University and a master’s degree from Harvard. His wife is a tenured professor of law at the University of Richmond and the couple have two daughters.

Shanahan said Robinson's wife, Kimberly Robinson, applied to the Florida State University School of law and was not offered a tenured faculty position so the couple has lived apart for the past year, a strain Robinson cited in his letter to the governor.

"Living far away from my family has proven to be the one challenge all this progress could not overcome,'' he said. "So it is with sincere appreciation and deep regret my time of service to Florida’s students, parents, teachers, superintendents, college and university presidents, business and community organizations is cut short."

He highlighted the accomplishments he was proud of including increasing the FCAT achievement standards, obtaining a school waiver from the U.S. Department of Education and earning national recognition for accomplishments from early childhood learning to the Florida College System.

"It has been rewarding to work hand­ in-hand with your office in making education an important metric for continual improvement of our workforce and talent pipeline.'' he wrote.

Scott said in a statement that Robinson is a  "tireless advocate for creating quality learning opportunities for all of Florida’s students and he will certainly be missed.''

Robinson's resignation is effective Aug. 31. The Board of Education will begin searching for a replacement, Shanahan said, but has no one yet in mind.

"I hope we can attract another national reform-minded education leader,'' she said.