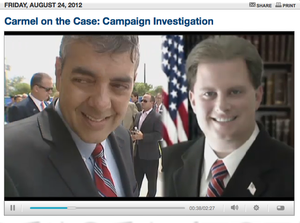 Imagine if Sen. Marco Rubio had been picked as Mitt Romney's vice presidential candidate, only to have the story break about Rep. David Rivera's potential involvement in a campaign that is facing a federal grand jury investigation.

It probably wasn't tough to forsee for the Romney campaign, where some insiders were nervous about Rivera, who's already under federal investigation in connection with a $500,000 secret dog-track payment.

Now comes the complicated case of Democratic candidate Justin Lamar Sternad, whose campaign was run by a Rivera pal against a Rivera foe, Joe Garcia in the just-ended Aug. 14 primary. Garcia, who faces Rivera, was trashed in a Sternad mailer that was printed, mailed and data-targeted by three companies with ties to Rivera.

The case is replete with cash-stuffed envelopes and a mystery candidate/part-time hotel worker who amended campaign reports to show he loaned himself $64,000 on an annual income of $30,000. Oh, yeah, Sternad has declared bankruptcy before and his wife struggled to pay her credit card bill, leading Capitol One to win a default judgment against her.

Rivera initially denied involvement, but now he's changing his story. Albeit, in Spanish. Rivera ducks questions to the English-speaking press. But he sure does sweat.

Still, it hasn't gone unnoticed in the Florida delegation at the Republican National Convention, where folks are whispering about Rivera. Even Rubio's inner circle believes Rivera did it. Many use the same word to describe Rivera: "Nixonian," a nod to the fact that the Miami Congressman has a reputation for getting involved in schemes he doesn't need.

The Sternad case stands out as being particularly odd.

And Rubio, who still owns a Tallahassee house that was almost foreclosed upon when Rivera suggested they stop making their monthly payments, is keeping his distance.

He said he hasn’t spoken to him because: “I’ve been really busy the last 10 days. I was on vacation and then I’ve been here. I’m not sure he’s here.”