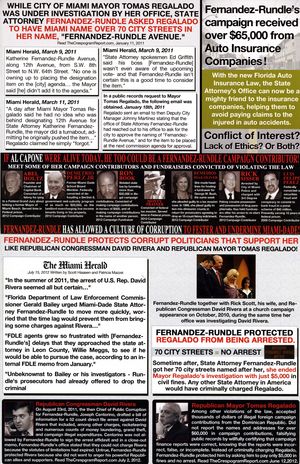 It seems every Democrat in Miami is getting these Police Benevolent Association-funded mailers that call Miami-Dade State Attorney Katherine Fernandez Rundle "The Most CORRUPT politician in Miami-Dade County."

It didn't help Rundle that her top campaign consultant, Al Lorenzo, hired career criminal Gerardo Judas "Jerry" Ramos to help work on her campaign. Rundle also had to recuse herself from an absentee-ballot fraud investigation amid rumors that Lorenzo or someone in her campaign was tied to a ballot broker who has been charged for allegedly forging a voter's signature and violating a county ordinance prohibiting third parties from possessing more than two ballots of other voters. 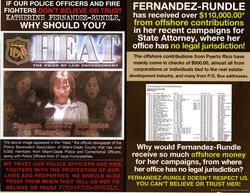 These mailers were printed well before the ballot-fraud scandal hit. Some of the allegations in the fliers are a stretch or untrue. But what's clear is that law-enforcement in Miami-Dade County appears dysfunctional.

At a May event kicking off the campaign of Rundle challenger Rod Vereen, PBA president John Rivera described the relationship between police officers and prosecutors as a “war.” 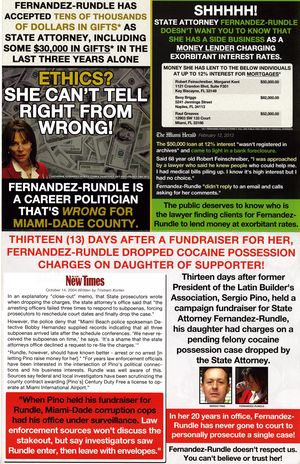 “This is the chance where the community can have a true law enforcement agency and a true prosecutor, not a politician, working together for the common good,” Rivera said.

The Miami-Dade PBA and its allies have pumped about $21,500 into the Big Vote for Justice Committee, which produced the fliers. Rundle allies say the PBA is getting revenge for being investigated by Rundle. PBA allies say they're trying to get a bad prosecutor out of office.

The mailers leave no angle unexplored, from bumbling prosecutions to road-naming designations to over-blown crime-stat claims to political contributions from Puerto Rico. One mailer is in English and Spanish. And they're so filled with text that the mailers look like Dr. Bronner soap labels. But what they lack in style, they make up for in over-the-top rhetoric and hard-hitting humor. 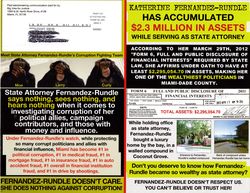 Another mailer features a trio of monkeys and states that she "says nothing, sees nothing, and hears nothing when it comes to investigating corruption of her political allies, campaign contributors, and those with money and influence."

"If Al Capone were alive today, he too could be a Fernandez-Rundle campaign contributor," one mailer reads above an attempted rogue's-gallery list of Miami-Dade insiders who, the piece insinuates, got off lightly or were never prosecuted by Rundle's office because they were pals and contributors. Rundle supporters say the piece misleads because it unfairly suggests a quid pro quo between the supporters' contributions and their legal troubles. 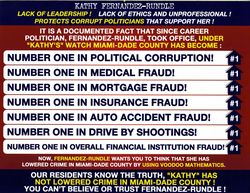 Some of the claims seem like a stretch, like the idea that Rundle went easy on Rep. David Rivera out of fear of powerful Republicans. But the conspiracy theory is probably inevitable because, to some, it's mind-boggling that her office refused to press any of the 52 charges it planned to level against him. Also, Rivera is no fan of Rundle.

In ticking off all the problems of the county ("number one in political corruption!") the mailer probably goes too far in saying Miami-Dade has become "number one in drive by shootings!" It also falsely suggests she has had 70 streets named after her while she failed to prosecute serious crimes.

"Our residents know the truth, 'Kathy' has not lowered crime in Miami-Dade County! Actually, violent crime has dropped. And it's tough to blame all the crime problems in the county on one person. 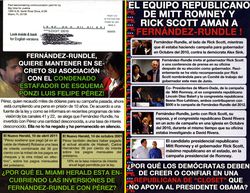 But make no mistake, South Florida is a hotbed for fraud and shady politics. And there's a persistent sense among many that Rundle's office hasn't been aggressive enough fighting political corruption. On the other hand, when her office tried to prosecute City Commissioner Michelle Spence-Jones, the case fell apart.

Spence-Jones appears to back Vereen as does Rivera.

Lobbyist Rick Sisser said in an email that he was thinking of suing over the mailer: "The ad states that I was 'Convicted of violating the law' [but] because of my graduation from "Drug Court" my case was nol-prossed. If I can find a signature of the individual that formed "Big Vote for Justice", I will file a defamation of character law suit. I was never convicted of anything. Arrested yes, convicted NO. In fact, I've never been convicted of anything. The address of 'Big Vote for Justice' belongs to Charles J. Flowers, a Michelle Spence Jones appointee to the City of Miami Waterfront Advisory Board."

We would ask PolitiFact to check all this. But the election will be long over by the time they get through every single claim.