"We have not endorsed or authorized the use of any campaign materials by this candidate and are notifying him that he must stop using it immediately," an Obama For America campaign official, speaking on background, told The Herald.

Sternad, who has sent at least six mailers, hasn't disclosed where he's getting the money or how he's paying for it, according to the Federal Elections Commission website, which shows he hasn't yet filed a pre-primary report ahead of the Aug. 14 vote.

Democrats, who had never heard of Sternad until he decided to run this year, are starting to suspect he's a plant from Republican Rep. David Rivera. A charge they both deny. But there are curious links: the Wyndham hotel company worker is using the same Hialeah mail outfit that did nearly $100,000 worth of work for Rivera in 2010. Sternad has avoided saying anything negative aboutt Rivera, but has gone out of his way to bash Garcia. And one Sternad mailer repeats some tough (and likely false) comments from Rivera about another Democratic challenger, Joe Garcia, who lost to the congressman in 2010. Two other mailers have decidedly hardliner messages on immigration -- positions that are pretty far from those espoused by Obama, whom Sternad claims he's backing. 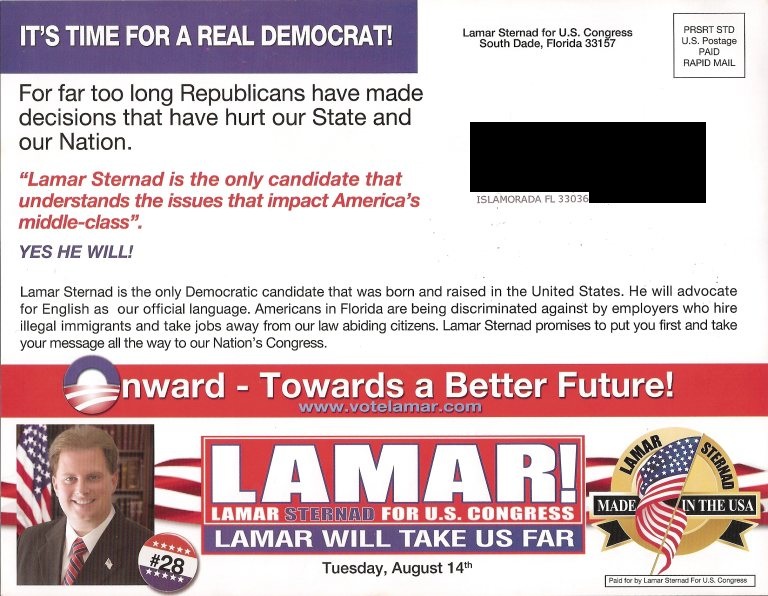