Just four days after Rick Scott stumped briefly with Republican presidential hopeful Mitt Romney in Florida, and talked about the need to replace Barack Obama in the White House, we get another message-clashing missive from the Romney campaign about the .2 percentage point rise in unemployment numbers in July.

Note they're not mentioning the Gov. Rick Scott Talking Points, which emphasize that unemployment has been dropping pretty steadily in Florida since he took office. They make a cryptic mention of "pro-growth leaders in Florida" but carefully don't name the governor.

Admittedly the latest report is a blip upward, so the governor's message is now a bit mixed. But Scott spokesman Brian Burgess see no conflicting message. (See charts below for illustration.)

"Romney’s message is that the economy should be in much better shape that it is,'' Burgess said in an email. "Gov. Scott has said the same thing.  But Gov. Scott also makes the case that things have improved under his leadership here in Florida – and at a faster clip than the national economy has improved."

For emphasis, he added: "There is no conflicting message coming from the two camps – this is a narrative whipped to life by people who are willfully ignoring the obvious – which is that there is a substantial headwind coming out of DC, and while Florida is on the right track, that track could be moving a lot faster if we had a president that knows how to create jobs instead of a president that is working against Governor Scott’s efforts to create jobs."

ALL: New state-by-state jobs numbers are out, and they aren't good. In all, unemployment rose in 44 states in July, including Florida. The Florida unemployment rate rose from 8.6% to 8.8% in July, as the state lost another 3,300 jobs. More than 800,000 Floridians remain jobless, 42 months after Barack Obama and Charlie Crist stood on stage in Ft. Myers and promised spending money we could not afford would lower the unemployment rate.

Nationally, only 4 states saw no change to their unemployment rate, and just 2 saw their unemployment rates drop. Despite the work of pro-growth leaders in Florida, which has yielded positive results, today's jobs numbers prove that without new leadership in Washington, the number of unemployed and underemployed Americans will continue to remain unacceptably high. This can’t be the new normal. --Jeff Bechdel

From the Office of the Governor. Romney's message: 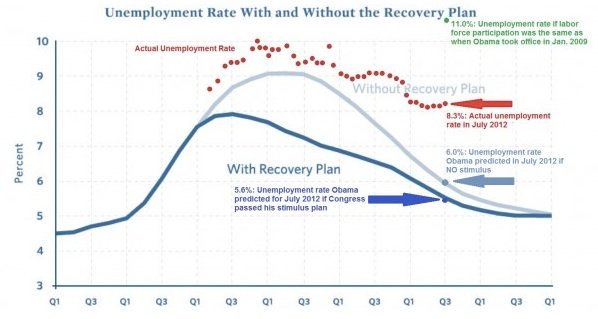 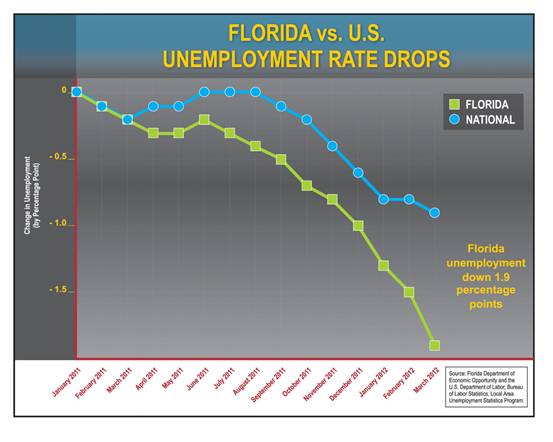 TALLAHASSEE— Florida’s unemployment rate increased by 0.2 percentage point in July, to 8.8 percent. Amid this fluctuating month-to-month unemployment rate, the state has continued to see positive annual job growth for 24 consecutive months. Additionally, Florida has gained more than 130,000 private sector jobs since December 2010, and led the nation in July in online job ads gained over the month. Florida was also one of only eight states in the nation that saw an increase in job demand.

“While the unemployment rate can vary from month to month, Florida continues to see positive private sector job growth,” said Governor Rick Scott.  “My goal remains the same, to make Florida the number one business destination in the world by improving the state’s economic climate, highlighting our talented and skilled workforce and getting Floridians back to work.”

Since Governor Scott has been in office, the state’s unemployment rate has dropped 2.3 percentage points and has seen an increase of 130,700 private sector jobs. According to the University of Florida’s Bureau of Economic and Business Research, consumer confidence in Florida rose in July due to improved perceptions of personal finances and was at the highest level since the end of the recession in December 2009, and state revenue projections have continued to improve. Job demand increasesAccording to the Help Wanted OnLine data series from The Conference Board, Florida job postings in July 2012 led the nation in over-the-month growth in job demand with more than 264,000 openings, and increased by almost 30,000 openings compared to July 2011. Major occupational groups with the most online ads in July were sales and related occupations; healthcare practitioners and technical occupations; office and administrative support occupations; and computer and mathematical occupations.

·       Florida’s job growth month to month has been positive for 10 of the last 13 months Workforce Boards assisting more FloridiansAlso in July, the state’s 24 Regional Workforce Boards reported that more than 25,000 Floridians were placed in jobs. Of these individuals, 6,400 previously received reemployment assistance.

Since January, 205,000 individuals were placed in jobs, with more than 46,000 former claimants finding employment.   Statewide trends improvingFlorida also saw positive trends in housing, exports and reemployment assistance claims. Florida housing starts were up over the year by 26.2 percent, while median home prices were up over the month by 2.7 percent and up over the year by 8.2 percent. Through June 2012, Florida-origin exports are 6.4 percent ahead of the same period last year, a gain of $1.9 billion year-to-date. Initial claims for reemployment assistance benefits were down by 25.0 percent from one year ago while continued claims were down from an average of 553,000 in December 2010 to 327,000 in July 2012, a 41 percent decrease.

“Under Governor Scott’s leadership, we have seen positive trends in various areas of our economy, including a decrease in the number of reemployment assistance claims,” said Department of Economic Opportunity Executive Director Hunting F. Deutsch. “Our collaboration with our workforce partners around the state is bringing innovative initiatives that are providing job seekers with the skills they need to be successful in the workforce.” To view the July 2012 monthly employment data visit:www.floridajobs.org/labor-market-information/labor-market-information-press-releases/monthly-press-releases .