Study: Mitt Romney's tax plan could save millionaires $87,000 and raise taxes on the middle class 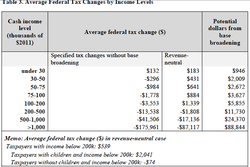 The nonpartisan Tax Policy Center produced an analysis that incorporates Republican presidential candidate Mitt Romney's plan and has concluded that it could save the rich lots of money and actually cost other taxpayers a little bit more.

Romney wants to slash income tax rates by 20 percent for all taxpayers. And, because the rich pay more in taxes, they would therefore save more. But, in order to ensure that the plan doesn't increase the budget deficit and national debt, Romney says he wants to eliminate tax breaks. But he hasn't named them.

But most of the big-dollar tax breaks disproportionately help the middle class who get write-offs for, say, employer-provided health insurance, state and local taxes or mortgage interest.

Eliminate or seriously cut back those subsidies and it could cost people more money in the end, the report showed, even though it intentionally biased its assumptions in Romney's favor.

"Our major conclusion is that any revenue-neutral individual income tax change that incorporates the features Governor Romney has proposed would provide large tax cuts to high-income households, and increase the tax burdens on middle- and/or lower-income taxpayers," the authors wrote. "This is true even when we bias our assumptions about which and whose tax expenditures are reduced to make the resulting tax system as progressive as possible. For instance, even when we assume that tax breaks – like the charitable deduction, mortgage interest deduction, and the exclusion for health insurance – are completely eliminated for higher-income households first, and only then reduced as necessary for other households to achieve overall revenue-neutrality– the net effect of the plan would be a tax cut for high-income households coupled with a tax increase for middle-income households."

The Romney campaign has yet to comment. It has refused to this point to give specifics about how his tax plan would work -- that is, would tax preferences he would eliminate. However, Romney supporters are sure to note that the study doesn't include budget cuts, which would offset the need for eliminating tax breaks.

But Romney hasn't done much in specifiying his cuts, either. He wants to boost defense spending. And he has criticized Obama for cutting Medicare in ObamaCare, suggesting he wants to leave this alone. His Social Security plan isn't in depth, either. So savings there are unclear.

President Obama's campaign has weighed in with a study of its own. One focused on Florida and claims that Romney's plan "could result in a tax increase for 7.6 million families in Florida. Second, Romney has made it explicitly clear that he would roll back tax cuts President Obama has signed into law and is fighting to extend, a move that would raise taxes on 18 million working families – including 1.2 million in Florida. Finally, in addition to making the Bush tax cuts for millionaires and billionaires permanent, Romney would add another $5 trillion in new tax cuts weighted to the wealthiest, and says he has a secret plan to close tax deductions and other benefits to pay for it. While the impact of Romney’s plan cannot be known for certain, the Florida households earning between $50,000 and $200,000 a year that might be impacted by Romney’s plan include: 1,115,000 Florida households paying off their mortgages; 1,124,000 Florida households making charitable contributions; 1,319,000 Florida households deducting their state and local taxes; and 1,771,000 Florida households who are not taxed on the health benefits they get through their jobs."

There's a high chance Obama will emphasize the potential problems with Romney's tax plan when the president visits Orlando tomorrow.

The Romney campaign might be willing to ignore this issue, banking on the notion that voters trust Republicans more than Democrats on taxes and deficits. Consider that Obama said he'd cut the deficit in his first term, but instead the opposite happened. Romney's campaign could also be waiting until later in the campaign (Romney technically hasn't been nominated yet at the Republican National Convention) to release more specifics on Romney's timetable.

Eventually, Romney's probably going to have to answer the question: What are the numbers?

A few Republican and conservative tax analysts haven't yet been able to answer that, either. While lacking data to refute the Tax Policy study, some accuse it of liberal bias because it's a joint project between the Urban Institute and the Brookings Institute, which has a reputation of having liberal leanings. However, one of the directors of the Tax Policy Center is Donald Marron, who was picked by Republican President George Bush in 2008 to serve on his Council of Economic Advisors.

The Romney campaign on Nov. 4 had a different view of the Tax Policy Center when it examined Republican rival Rick Perry's plan and called the study an "Objective, Third-Party Analysis."

The Romney campaign followed up later and faulted the Tax Policy Center for not factoring in budget cuts or the value of corporate-income tax cuts. But the center notes that the economic assumptions of the Romney campaign are unprecedented because big corporate tax cuts have never been shown to raise revenue.

"This isn't bias. These are numbers," said Looney. "It's pretty plain math. It really is just algebra." Looney acknowledged that the study didn't analyze budget cuts, which is an even larger and more complicated issue, that could offset the need for eliminating tax preferences in the event of a 20%-across-the-board tax-rate cut. He noted that Congress is already grappling with cutting the budget now and that current revenues aren't high enough to keep pace with spending. That's why they analyzed the tradeoff with tax preferences.

"If you cut tax preferences," he said, "you're cutting basic middle-class benefits." (See the pie chart for the percentage breakdown of these popular tax preferences by type).