Who is Ted Yoho?

Voters forced U.S. Rep. Cliff Stearns into a shocking early retirement Tuesday. But, even more improbable is who they chose to replace him.

Meet retired Gainesville veterinarian Ted Yoho, with his modest money chest and campaign staff of one.

The Times/Herald traveled to Yoho's Gainesville office Wednesday to meet the political rookie who unseated a senior congressman and beat out a state senator for the newly-drawn District 3. More on that here.

“We went into this hoping to win,” said Yoho, who sold his veterinary practice and launched his campaign in 2010. “But did I expect this? My feeling right now is just…numb.”

Round-the-clock campaigning, countless interviews and a late-night victory party at the Pickled Pelican in Jonesville had tired him out, Yoho said.

But he and his family seemed to brim with energy as they worked in the small, colorful campaign office that once served as the business headquarters for Yoho's vet practice.

Minutes earlier, as Yoho’s family listened on speakerphone, Stearns had conceded the race and offered congratulations.

"It was a relief," Yoho said, tugging on his orange and blue Gator tie.

Other candidates had outgunned Yoho in spending, volunteers and political experience. But, like many rookie candidates, he casts his lack of political background as a positive.

“Our message is that we’ve all had enough,” said Yoho, whose last trip to Washington was more than ten years ago, when he accompanied his then-fifth grade son and a group of orange-belted school safety patrols on a field trip.

The walls are plastered with goofy campaign pictures and colorful district maps.

Friends and family pop in to cheerfully deliver messages, accompanied by the family dogs Maya and Lucy, also overjoyed.

A white printout behind the office’s only desk quotes Benjamin Franklin, “The constitution only gives people the right to pursue happiness; you have to catch it yourself.”

Yoho has never held elected office and his only paid staff is his 24-year-old campaign manager, Kat Cammack.

As a congressman, he wouldn't want to sponsor many bills, he said. He thinks the government should intrude less in people’s lives.

He wants to repeal the Affordable Care Act and other regulations he believes stifle small business owners.

"How come nobody has stood up to the president?" he asked. "I am willing to stand up."

Yoho was pleased and shocked when more than 300 people came to his first fundraiser in 2011.

The campaign is fueled by a small group of vocal supporters and he dominated in Tea Party straw polls.

He carried 11 of the district’s 13 counties, but drew most support from the rural areas.

His personal life could be a George Strait ballad.

He met his wife Carolyn in fourth grade, and they’ve rarely been apart.

At their Deerfield Beach high school, she was head cheerleader and he was football star.

Their classmates crowned them prom king and queen. They married young, and bought a trailer together when he was 21 years old.

She worked as a court reporter to put him through vet school at the University of Florida. They have three children.

If Yoho wins the general election on Nov. 6 (the area favors Republicans), Carolyn will accompany her husband to Washington.

Below: Yoho at one-year campaign anniversary rally in Newberry 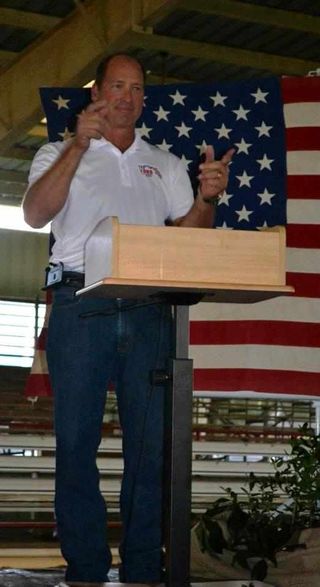