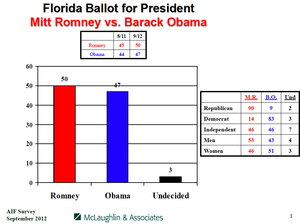 The Associated Industries of Florida business group has released snippets of a survey taken by  Mclaughlin & Associates, a firm that typically polls for Republicans, which finds Mitt Romney clinging to an inside-the-error-margin lead over President Obama, 50-47%, among likely voters.

Th AIF numbers suggest a significant bounce compared to pre-convention surveys from Quinnipiac University and CNN/Time/ORC  (Although Public Policy Polling, which typically surveys for Democrats, found Obama up by just 1 before and after the conventions). And the Florida figures show a more comfortable lead for Romney now than he faces nationwide, where most surveys indicate Obama got a 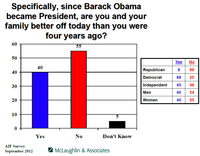 But there's still a good chance that Florida could be breaking the opposite direction from the nation. The state's jobless and home-foreclosure rates are higher than the nation's. The poll says 55 percent to 40 percent of likely voters say they're not better off than four years ago. There's also a good chance that this one poll will be a pro-Romney outlier as other surveys are released.

The internals of the AIF poll have good and bad news for Obama. On the good side, Obama is tied among independents (46-46%) in a state where Democrats outnumber Republicans by about 450,000 active registered voters. On the bad side, Obama does worse among Democrats (14 percent would vote for Romney) than Romney does among

Republicans (9 percent would vote for Obama).

If the poll is right, Romney has done a far better job solidfying his base than Obama and has attracted a bigger share of Florida Democrats (largely from conservative rural/North Florida, presumably).