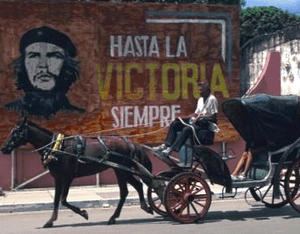 The Environmental Protection Agency sent out an email honoring Hispanic Heritage month by including a picture of a man riding in front of painting with the mural of Ernesto "Che" Guevara, the website The Weekly Standard first reported.

Depicting a Marxist revolutionary in a government email is the very type of Hispanic-outreach that President Obama doesn't need and that Republicans are revelling in this election season.

Except for pictures of Fidel Castro, there are few images that can do more to outrage Cuban Americans -- a pillar of Republican support in the largest county of the nation's largest swing state -- like Che's. (Check out the photo below of a typical shopper in a Miami grocery store wearing T-shirt equating Che with an ape). But Cuban Americans are a third of Florida's Hispanic population, and the positive sentiment for Che is stronger among other Latinos, who happen to vote Democrat.

The picture enclosed in the email shows an old man in a donkey-pulled cart in front of a mural of Che that reads "On to victory -- always."

For years, Republicans have tried to paint Obama as some tyoe of Marxist. Someone at EPA just handed them a brush and a can of red paint. It didn't help that the Democratic National Convention yesterday apologized for using images of Soviet-era ships in a backdrop that was supposed to commemorate the U.S. Navy. 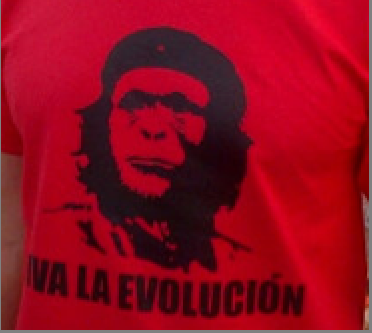 Not only did the EPA email contain a picture of Che, The Weekly Standard also figured out that one of the paragraphs  was "lifted word-for-word and without attribution from the website Buzzle.com." Here it is:

"Hispanic people are vibrant, socializing and fun loving people," one entry reads. "Among various facts associated to this culture is that they have a deep sense of involvement in their family traditions and cultures."

Here's Jill Bader, Republican National Committee Florida spokeswoman: "Nevermind  that the email contained plagiarized text, WORSE is that the Obama Administration chose to highlight a poster of Che Guevara, a violent Marxist who routinely  advocated for the destruction and collapse of the United States."