President Barack Obama has received unexpected help from the unlikeliest of quarters: The Republican National Committee.

Devoted to bashing Obama, the RNC gave the president’s reelection campaign a political contribution of sorts by insisting that state parties, such as Florida’s, hire a vendor that’s now under investigation for voter-registration fraud by the Florida Department of Law Enforcement in as many as 10 counties involving at least 220 suspect forms.

Remember all that talk from Republicans about voter fraud?

“When the Republican Party of Florida chose to make likely libelous comments about our effort and stated that the Republican National Committee suggested us as the vendor, the RNC was put in the unenviable position of ending a long-term relationship for the sake of staying focused on the election,” a company statement said this week.

“While we wish their comments yesterday would have more accurately addressed the situation, we understand the logic of ending distractions and winning elections. We wish our friends there nothing but success going forward,” the statement said.

The Florida Democratic Party couldn’t have paid for such a result: The RPOF bashing an RNC vendor that turns around and bashes RPOF for slander. 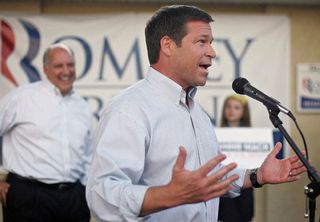 DESTIN -- If Republican Connie Mack IV is shouldering the burden of his party’s control of the U.S. Senate, you wouldn’t know it last week as he finished a six-day bus tour of 17 cities in north and central Florida.

In 26 stops, Mack drew modest crowds and meager media attention as he crisscrossed the state. The steady drip of negative poll numbers had him battling expectations as much as barbs from his challenger, incumbent Democrat Sen. Bill Nelson. And with about four weeks before early voting begins, the general public still seems ambivalent.

In the Republican stronghold of Destin on Thursday, Mack greeted about 25 supporters outside the Donut Hole café on Highway 98, and then went inside to introduce himself to customers.

“Could you get us menus?’’ one elderly couple asked Mack, 45, the four-term congressman from Fort Myers, after he shook their hands. The congressman obliged.

None of it has cracked Mack’s cool.

That’s a hard hill to climb, according to the polls. In this must-win swing state for Romney, the former Massachusetts governor remains locked in a statistical tie with President Barack Obama. The latest Senate polls show Mack trailing Nelson by between nine and 14 percentage points. Even Mack’s own poll, a survey of 600 voters taken last Sunday, showed him five percentage points down, with a margin of error of plus or minus four percent. More here.

Can Florida's Medicaid experiment be the model for the nation?

Quietly, over the past six years, an experiment in providing healthcare for the poor has been playing out in Broward and four other counties around the state. Its basic goal is to relieve the financial pressures of Medicaid on Florida’s taxpayers by turning over poor and disabled patients to private companies, a move lawmakers believe will cut costs.

Conservatives love the Medicaid reform program, pointing to an in-depth University of Florida study indicating that the experiment has lowered costs while not raising consumer complaints. The Legislature has already approved a slightly modified model of the reform to go statewide. At least one national think tank believes it should be a model for the entire country.

Liberals decry the effort as a way to build corporate profits at the expense of the poor. Howard Mallinger, a Sunrise retiree, thinks they’re right. He has two adult sons with mental health problems who are in a Medicaid health maintenance organization. The HMO frequently won’t provide their medications, or is slow to approve them, causing their health issues to spiral out of control, Mallinger says.

One son has been involuntarily committed under Florida’s Baker Act 44 times in the past five years, he says. That often means expensive three-day hospital confinements. “The joke is on the taxpayer,” Mallinger says.

The Republican Party of Florida on Saturday chose Michael LaRosa, R-Celebration, as a replacement candidate for House District 42, which became enmeshed in scandal this week.

On Monday, Rep. Mike Horner, R-Kissimmee, abruptly dropped out of the race when his name came up on client list during an investigation into an alleged prostitution ring.

Horner’s name will remain on the ballot, but all votes cast for him will go to LaRosa, a young candidate who graduated for the University of Central Florida in 2004.

"I commend Michael LaRosa for his strong desire to serve his fellow Floridians in the State House and his willingness to run under difficult circumstances. The citizens of House District 42 will be well represented in Tallahassee under his leadership" RPOF Chairman Lenny Curry said in a statement.

Gov. Rick Scott announced late Friday he planned to join the search for missing University of Florida student Christian Aguilar. He will be in Gainesville on Saturday, beginning at 9:30 a.m. to join the search party, according to a schedule released by his office in Tallahassee.

Click here for the latest from Miami Herald on missing teen.

Florida fires back at feds over kids in nursing homes

In a letter to the Justice Department’s Civil Rights Division, Florida social service chiefs called “unfounded” the claim that the state needlessly warehouses disabled and medically fragile children in nursing homes meant to care for elders. Agency heads reached that conclusion after a two-week investigation in which they interviewed the parents or caregivers of many disabled children “to ensure that they were aware of the services available for them in the community.”

“In your letter, you express concern about the welfare of Florida’s children,” said the letter, signed by the lawyers for three state agencies — the Agency for Health Care Administration, the Department of Children & Families and the Department of Health. “The state assures you that the healthcare professionals at the Florida agencies charged with the daily responsibility of ensuring child welfare are equally concerned.”
“Indeed, these hardworking employees at [the three agencies] have dedicated their lives and careers to ensuring that this and other vulnerable populations receive necessary medical services” in community settings, the letter states.

Rivera, under separate federal criminal investigations into his personal and campaign finances, trails Democratic challenger Joe Garcia by 9 percentage points in a Democratic poll and he’s behind by 10 points in the Republican survey — just outside the poll’s error margin.

Rivera’s campaign has produced its own survey showing he has an inside-the-error margin lead of 4 points.

The Republican survey is the newest and most eye-opening because it was conducted Tuesday and Wednesday by a top-flight GOP polling firm with vast experience in Florida: McLaughlin & Associates.

Pollster Jim McLaughlin confirmed the numbers in the poll, but he declined comment and he wouldn’t disclose who paid for the survey obtained by The Herald.

“This is a quality polling firm, and based on the data, it’s very difficult for Rivera to come back,” said political consultant David Custin, who successfully led efforts to defeat Garcia in his previous congressional races in 2010 against Rivera and in 2008 against Republican Rep. Mario Diaz-Balart.

“I don’t want Joe to win,” Custin said. “But this poll makes it look like he will.”

The survey shows Republican presidential candidate Mitt Romney trails President Obama 43-51 percent in the GOP-leaning district, which voted an average 4 percentage points more Republican compared to the national average for the results of the two prior presidential campaigns. In some ways, the results of this survey shed light on Romney’s struggles in must-win Florida.

Obama is besting Romney in every recent major Florida survey, albeit the Democrat’s statewide leads are often within the error margin.

In the district, voters essentially deadlocked 47-47 on whether it’s bad to raise taxes on the wealthy or not. And when asked about Republican vice-presidential candidate Paul Ryan’s Medicare, 45 percent said it would be more likely to save “trillions” of dollars while 38 percent said it would end Medicare.\

Hit with a barrage of criticism over the Republican Party of Florida siding with a right-wing conservative group in opposition to the state's three Florida Supreme Court justices, RPOF Chairman Lenny Curry roared back on Friday with an op-ed in a handful of newspapers and online sites.

Some news organizations, such as the Tampa Bay Times, have refrained from running it because they claim it includes false information.

"Here’s a riddle for Florida voters,'' Curry begins, in an opening laced with sarcasm. "Who wears a black robe, is sitting on a stack of a million greenbacks, and has a red face because voters get to decide whether or not they keep their jobs?"

He answers his rhetorical question by naming the state's three justices who are up for merit retention, Justices R. Fred Lewis, Barbara Pariente and Peggy Quince. Then adds:

"The three of them are sitting on a combined political war chest of more than a million dollars, given to them by special interest groups, trial lawyers and political activists.  And they are red-faced with anger that voters get to decide their fate at the ballot box."

Curry said the idea of opposing the three justices sprung from a "grassroots groundswell raised the issue ahead of a board meeting" and he denied persistent rumors that the issue was inserted onto the agenda at the urging of Gov. Rick Scott, who will be able to appoint replacements if the three justices are not retained.

"They couldn’t be more out of touch with reality,'' Curry wrote. "...the governor had nothing to do with it."

Rubio to join Mack on Monday for events in Miami and The Villages, Nelson to barnstorm

U.S. Sen. Marco Rubio will meet up with Republican Congressman Connie Mack IV for campaign events in Miami and the Villages on Monday.

Meanwhile, U.S. Sen. Bill Nelson has announced a "Barnstorming tour" of the state beginning Oct. 22, after the Oct. 17 debate, "covering Florida from tip to toe,'' he campaign says.

Details for the Mack event are here:

TALLAHASSEE —A vendor fired by the Republican Party of Florida for submitting questionable voter registrations forms in Palm Beach County is also responsible for filing flawed applications in other counties and states, election officials confirmed Friday.

But subsequent to that revelation, other counties have reported irregularities with voter registration forms with the identification number of 11-93 — which traces back to the Republican Party of Florida.

"We have heard from supervisors in five counties, Lee, Duval, Dade, Santa Rosa, Escambia, saying that they have seen irregularities on voter registrations," said Chris Cate, spokesman for the Florida Division of Elections in an email to the Times/Herald. "We are in the process of reviewing these cases and will provide our findings to the appropriate agency to investigate."