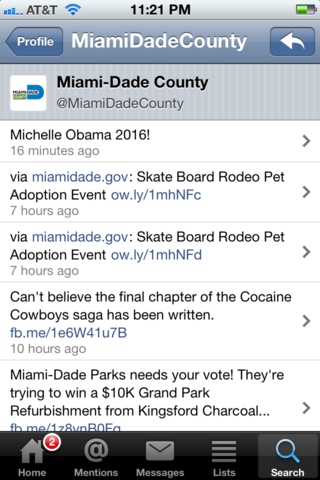 That much was evident Tuesday night, when First Lady Michelle Obama delivered her speech to the Democratic National Convention in Charlotte, N.C. Sometime around 11:05 p.m., the @MiamiDadeCounty Twitter account tweeted, "Michelle Obama 2016!"

The tweet was conspicuous, coming from a government account that usually tweets public-service announcements such as "Miami-Dade County is no longer under Tropical Storm Warning" and "All Miami-Dade Transit services are operational."

At least three Miami Herald reporters retweeted the county's tweet. Several other followers also picked up on it, suggesting the county had apparently endorsed the first lady.

(Earlier Tuesday, the county account had sent out another unusual tweet, over Colombian drug "queenpin" Griselda Blanco: "Can't believe the final chapter of the Cocaine Cowboys saga was been written." The tweet included a link to this Herald story.)

Wednesday morning, @MiamiDadeCounty tweeted to its more than 6,300 followers: "Due to tech error,a personal tweet was posted on our account.Post was removed & issue corrected." It also copied the tweet directly to the users who had retweeted the county on Tuesday night.

County spokeswoman Suzy Trutie said Wednesday that one of the administrators of the @MiamiDadeCounty account "erroneously linked their personal and County accounts."

"The accounts were unlinked and the personal posts were removed from the County's account," Trutie said in a statement provided to the Herald. Staff has reviewed all administrators' account preferences to ensure this error does not occur again. The employee has been disciplined." (But not fired.)

The account is managed by the county's department of Community Information and Outreach.

Both the Michelle Obama and Cocaine Cowboys tweets have been deleted.