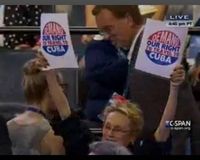 Here's something you don't see at the Republican National Convention: An activist holding up a sign calling for more travel to Cuba. President Obama loosened travel and monetary-remittance restrictions to Cuba. But under Helms-Burton, travel to Cuba isn't free and easy (and, of course, once you're in Cuba you're subject to the whims of the dictatorship).

Public opinion surveys indicate that support for Cuba restrictions is thawing. But the Republican base in Miami-Dade County, where 72 percent of the GOP is Hispanic and overwhelmingly Cuban, still favors a hardline stance.