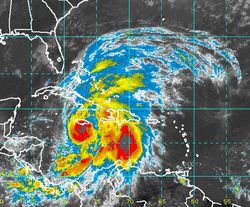 President Obama needs a huge early voting turnout in Florida on Saturday, when in-person early voting begins. This will mark the only weekend for early voting in Florida, where Democrats typically dominate at the polls.

Black ministers are gearing up for what they call "Operation Lemonade" to juice up the African-American vote, especially in South Florida. It's a critical component to Obama's election hopes.

Republicans, as usual, are doing well at voting by absentee ballots, which are typically mailed in. They're leading Democrats by just over 5 percentage points as of this morning (blog here).

But this weekend also marks the arrival of Hurricane Sandy, which could be a tropical storm by the time it clears through Jamaica and Cuba by 8 a.m. Thursday. On the current track, Sandy doesn't look like a major threat to Florida. The storm is supposed to bend to the northeast, away from the state. So it could be a beautiful weekend in Florida, and a great one for President Obama. 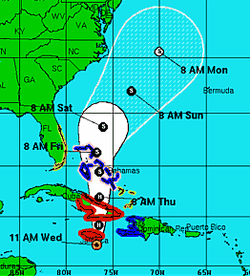 However, if Sandy bends west, slows down and dumps rain across Florida, that's bad news for President Obama and good tidings for the Republicans. Sandy is big and sloppy, so Florida's due for some rain. But the question is: When and where?

On a side, but related note, the absentee-voting gap-closing by Democrats has been noteworthy. In 2008, Democrats trailed absentee voting at this time by about 16 points. Now it's about 5.

But Republicans have closed another type of gap: Voter registrations.

Democrats have complained that the Republican-led Legislature dampened voter registration drives through an onerous crackdown, which has since been lifted by the courts. However, Democrats lost most of their voters before that law was passed.

Also, the Obama campaign has registered about 322,000 new voters and it's better organized than it was in 2008. So count that in the plus column for the Democrats.

Yet, relative to 2008, Republican Mitt Romney is in a much better position than McCain in Florida. So Republicans have an edge there.