« American Crossroads, like Mack, slams Nelson for his 'cow' exemption | Main | It's Miami-Dade County vs. the feds in fight over Miccosukee-owned golf course in Miami suburbs »

The National Association for the Advancement of Colored People came to the Florida Capitol on Tuesday to launch a national campaign against policies that withhold voting rights from millions of people who have a felony conviction on their record.

With national NAACP president Benjamin Todd Jealous and Golden Globe-winning actor Charles Dutton headlining, the group tried to shine a spotlight on the the issue of "felony disenfranchisement."

“Voting is a right,” said Jealous, speaking from the steps of the Old Capitol in Tallahassee. “In this state, the governor has decided to turn back the clock.” 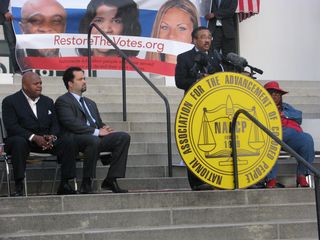 In Florida, people who have been convicted of felonies must wait five to seven years after completing their sentences to apply for restoration of civil rights, including the right to vote. The process can take several additional years to work through the system, and the number of applications processed per year has fallen precipitously in recent years.

Last year, Gov. Rick Scott and the Florida Cabinet ended the policy of automatically restoring rights to released felons, a policy started under former Gov. Charlie Crist. Most states automatically restore the right to vote to felons who have served their prison time.

Scott said last year that the changes were enacted in a reform effort that “prioritizes public safety and creates incentives to avoid criminal activity.”

"Gov. Scott believes that for convicted felons to re-enter civic society, they must demonstrate a commitment to remaining crime-free as well as a willingness to request to have their rights restored," a Scott spokesperson said Tuesday.

NAACP leaders counter that the move was one of many that Republicans have used to suppress the votes of blacks and minorities. Blacks make up about half of Florida’s male prison population, though they account for less than 15 percent of the state’s population.

Speaking at the NAACP event, Sen. Arthenia Joyner, D-Tampa, said that was one move among many aimed at suppressing the votes of blacks, who form a loyal Democratic voting block.

“Why the long waiting period?” said Joyner. “The governor claims it seems reasonable. Reasonable? Reasonable because too many ex-offenders are returning to a life of crime, or, reasonable if the GOP is trying to stack the deck against Democratic candidates?”

NAACP will be putting up billboards across the country with pictures of former felons who have been denied the right to vote, including celebrity spokespeople like Judge Greg Mathis and Dutton.

“I was released from prison in 1976 and I was only allowed to vote in 2007,” said Dutton, who has starred in movies like Alien 3 and A Time to Kill.

The aim of the campaign, said Jealous, is to bring more public awareness to the issue of “felony disenfranchisement” and convince governors in states like Florida, Virginia, Iowa and Kentucky that they are they are on the wrong side of history.