What Big Bird says about our politics and Washington 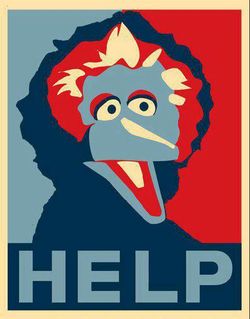 The presidential campaign’s stalking horse is big, yellow and not much of a horse at all.

“I like PBS, I love Big Bird,” Republican Mitt Romney said at least week’s debate. “But I’m not going to . . . keep on spending money on things to borrow money from China to pay for.”

“Crack down on Wall Street, not Sesame Street,” read one sign held by a liberal feather-suited angry bird.

In the context of a presidential election, this can seem silly and small.

But that’s a good thing.

Silly things can grab the public’s attention more than, say, the implications of Medicaid. Small issues are digestible.

There’s now a fluffy, yellow, easy-to-recognize face that symbolizes the fiscal mess the country is in and the difficulties of getting out of it. Try to cut a government program and you’ll be told 1) it won’t do anything or 2) it will be catastrophic. 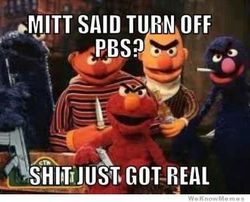 PBS’ defenders were quick to note during Wednesday’s debate that PBS doesn’t get all of its money from the federal government and that cutting the $445 million that flows to public television and radio stations would amount to trimming .012 percent of the nearly $3.8 trillion federal budget.

Bottom line: It wouldn’t make much of a difference to the debt or deficit. So leave it alone.

That argument from the left is strikingly similar, in broad terms, to what the right says about President Barack Obama’s plans to reinstate Clinton-era tax rates on the wealthy — that it’s not enough to bring down the deficit (about $1.3 trillion) or the overall debt ($16 trillion).

Still, the value of Obama’s tax increases wouldn’t be chicken scratch either: $56.3 billion — or about 126 times the deficit-saving worth of eliminating public-broadcasting money.