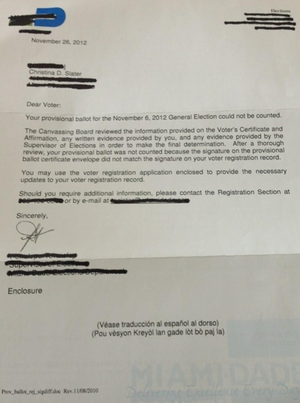 Actor Christian Slater waited hours in line to vote in Miami-Dade on Election Day -- only to learn his vote didn't count.

Slater on Friday posted a picture on Twitter of his Nov. 26 letter from Miami-Dade County's canvassing board, which addressed him as "Christina Slater," the website BuzzFeed first reported.

Slater had Tweeted about his Election Day-wait as well as his problems casting a ballot.

"Made it in the room only to find out the DMV didn't register me when I got my new license. They asked me if I wanted to reg and I said yes," Slater tweeted on Election Day. "So, now I'm standing by and waiting while this guy tries to get the State on the phone I guess. I really want to vote."

He did, by provisional ballot.

Get ready for more stories like this in Florida. Tens of thousands of provisional ballots were cast in Florida and many of them didn't count.