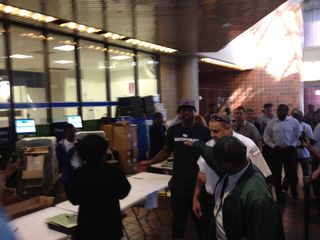 Alas, Wade did not hang out in line signing autographs. A proxy stood in line for him -- as the elderly and other voters are allowed to do -- and he later came in to actually vote, drawing a bit of a crowd.

As of 2:19 p.m., the line was about an hour long at the County Hall early-voting site, according to the Miami-Dade supervisor of elections' office.