Miami Commissioner Francis Suarez flush with contributions, even before he announces for mayor 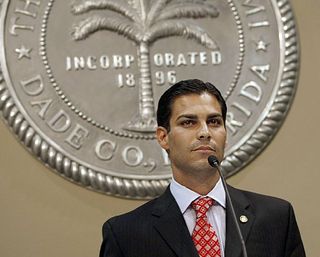 Miami Commissioner Francis Suarez has yet to say if he’ll run for mayor.

His campaign finance reports may speak louder than words.

Suarez raised more than $460,000 for his political committee in the last three months of 2012, a report released Friday shows. The only official candidate raising money, Mayor Tomás Regalado, collected about $91,000 in contributions over the same quarter.

The early fundraising efforts signal what city observers have been speculating about for months: that Suarez, the charismatic, 35-year-old son of former Miami mayor and current County Commissioner Xavier Suarez, could pose a serious threat to Regalado.

“The good news for Francis is that he’s going to have the resources,” Florida International University professor Dario Moreno said. “There are enough political and business types that Regalado has angered. They are going to be able to raise money [for Suarez].”