A look at Harry Sargeant: 'The most powerful person no one knows' 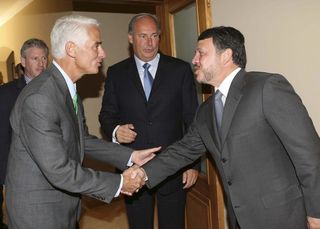 Former Gov. Charlie Crist calls him a "great patriot." Congressional investigators call him "a war profiteer" who walked away with an extra $200 million while providing fuel to American troops in Iraq.

At Florida State University, he is something of a hero — contributing more than a million dollars to athletic programs, the business school and his old fraternity.

Who is Harry Sargeant III?

A plaque at the Pi Kappa Alpha House on campus calls him "the most powerful man no one knows.'' The moniker comes from a 2008 Miami Herald story that noted his friendship with Crist and his wide-ranging business interests.

Sargeant, 55, is a billionaire former Marine fighter pilot, the owner of an oil and asphalt shipping company with global businesses including aviation companies and an oil refinery.

And in the tangled world of Florida politics, Sargeant is a Republican financial powerhouse.

He has long supported Crist while also helping former party chairman Jim Greer, despite the animosity between Greer and Crist since Greer was charged with stealing money from the GOP in 2010. Crist, now a Democrat considering an attempt to return to the Governor's Mansion, says Sargeant remains a close friend.

Campaign finance records show Sargeant has donated more than $1.5 million to Florida politicians and the state Republican Party since 2000, the year Crist ran for education commissioner.

In recent years, Sargeant has made headlines over fuel he supplied to U.S. forces in Iraq. The brother-in-law of the king of Jordan sued Sargeant in Palm Beach and won a $28.8 million verdict for being cut out of a $1.4 billion defense contract that allowed Sargeant to transport fuel through Jordan. (Sargeant is appealing.) A congressional oversight committee called for an investigation of payments to Sargeant's company, and last year auditors for the Department of Defense accused the company of overcharging the Pentagon by hundreds of millions. A federal investigation is ongoing.

Chris Kise, a Tallahassee lawyer who represents Sargeant, says the overcharging accusations came from Democrats who were angry at Sargeant's fundraising for Republicans. More from Lucy Morgan here.