Florida House Republicans are taking some inspiration from the Super Bowl to produce their plan for creating jobs in the state. The plan, called the “Jobs Playbook,” features many of the trademark GOP proposals—lower taxes, less debt and some old-fashioned bashing of the federal government to boot.

A football-themed infographic pits House Republicans’ strategy for winning up against the policies of the federal government—“higher debt, more deficits, economic uncertainty.” The release states, “Republicans have the playbook for economic success.”

This year, jobs and economic development have not played a starting role in legislative rhetoric, as in years past. Instead, legislative leaders are huddling up for some internal soul searching, hoping to clean up many of the problems created by the Legislature and the political class—ethics loopholes, campaign finance issues, elections problems, etc. Education and federal health reform are also top issues the Legislature must tackle.

Looking to show that job-creation has not been sidelined, lawmakers are pitching a playbook for economic development.

“Republicans have the playbook for economic success and we are dedicated to getting Florida over the goal line,” said House Majority Leader Steve Precourt, R-Orlando, in a statement. 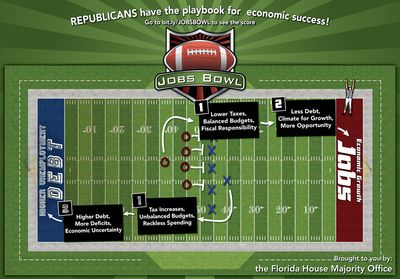 House Speaker Will Weatherford, a former college football player, is quarterbacking the Florida House’s Republican majority as it prepares to take on a growing and more confident Democratic caucus with a very different playbook.

Despite boasts of an improving economy, the jury is still out on whether policies listed in the report and pushed by Florida lawmakers are the best way to boost the state’s economy.

Florida created just over 50,000 jobs last year. Meanwhile, New York—a Democratically-controlled state often bashed as being “high-tax” and “anti-business” ( about the same size as Florida) created 123,600 jobs. Florida’s job growth rate is 0.7 percent, ranking the state about 34th in job creation, results that likely would not make the playoffs. By contrast, the U.S. job growth rate is 1.5 percent. States like California and Texas are scoring jobs at two and three times the rate of Florida.

Florida’s unemployment rate has dropped by 3-percentage points in the last two years, beating out most other states. But state economists point out that much of the drop is due to labor market shrinkage, not job growth. Florida’s economy is expected to pick up speed in the coming years, according to a Federal Reserve forecast and state economists.

Gov. Rick Scott has also switched up his playbook to focus more on education and less on cutting taxes and spending. In his proposed $74.2 billion budget, Scott is pitching a modest cut to the corporate income tax, a new sales tax exemption for manufacturers and more money for economic incentives. These proposals pale in comparison to investments Scott is planning to make in education and other government spending.

Scott said his policies have put the economy "back on track" and it's now time to invest the state's higher revenues into education and pay raises.

It’s unclear if Scott is spiking the ball on his job creation efforts or if he’s throwing a Hail Mary to try and reverse deflated poll numbers as the clock ticks down towards the 2014 election.