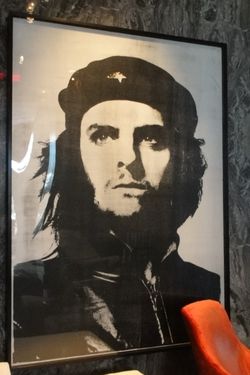 Gus Exposito couldn't believe what he saw in the marble walls of South Beach's W Hotel: a larger-than-life framed photograph of what looked like Cuban communist revolutionary Ernesto "Che" Guevara.

"He was a mass murderer, killed thousands of Cubans execution-style," Exposito, 51, wrote in an email, comparing the long-dead Fidel Castro pal to Adolf Hitler or the KKK. "I spoke to the manager and he referred to it as art!"

Turns out, it's probably not Che. It's another artist's rendering of the revolutionary. But Exposito says it's offensive nonetheless, raising the question: Is an image of an offensive image offensive? Is it art? Both?

The W isn't waiting around for answers, a hotel employee said. She said complaints started almost as soon as the photo, which could exceed seven feet in height, was posted about a week ago. It's supposed to come down.

The man in the photo looks a little different than the Che Guevara in iconic image taken by Alberto Díaz “Korda” Gutiérrez in 1959. Is this a younger Che, someone dressed like Che? There's a good chance that the photo is post-modern self portrait of artist Gavin Turk.

In The Guardian, Turk says he made a photo of himself posed as Che to advertise an exhibition: "It was quite a degraded, grainy image, so I could photograph myself in such a way that you wouldn't recognise that it was me and not, in fact, Che. You only need key elements of the photo - the beret, the long hair, the position of the eyes (as with classical icons, looking up and to the right), a bit of beard - to make it function as a symbol."

But it sure looks enough like Che. And if the hotel doesn't take it down, it might get ripped down, said one person who does business with the hotel.

"I can't believe no one has smashed a glass against it," he said, adding that it was part of the private art collection of one of the owners.

"Dude, it's Che Guevara. This is Miami. You don't do stuff like this. When you go to college in New York state, then it's cool at the time to have poster up. But down here, he's looked at a terrorist. He killed people," he said.

"This is a big picture of communist revolutionary hanging in a hotel that charges $900 a night for a single room. Che woulda burned this place down."

Back in the 70s and 80s, when anti-Castro activists were still active and armed, the hotel could have faced some serious trouble. It's possible the owner, who an employee said is from New York, is being intentionally provocative. Or perhaps he had no clue that putting this up in his hotel lobby area near the bar had he known about the sensitivity of the image.

Aside from coolness, after all, the Che image is associated with cluelessness. Just check out the Hispanic heritage month email sent out by the EPA that bore an image of Che.

But the image is common enough and enough time has passed since the 1959 revolution that not every Cuban-American is outraged. When asked about the idea of hanging a Che poster in a South Florida hotel, a regular Miami Herald reader named Mario Iglesias said it's time to grow up.

"I think the Cuban-American community has to mature and learn that the right to put up a picture of Che is the very reason we find Castro and Che so repugnant - because they would act to quash opposing speech," he said in an email. "It is the very result of being in favor of a free society that there will be holocaust survivors who have to tolerate Nazi marches and Cuban-Americans have to recognize that not protesting a Che poster is not the same as supporting Castro."

For Exposito, though, the right to post a Che picture doesn't translate into a good reason to display it. It seemed to ruin his night out.

"We went to dinner with my wife and two couples at Mr. Chow and after dinner we took a walk to the rear to smoke a cigar, and bang their it was we could not believe our eyes!" he wrote. "We went to the front desk and asked for the manager, a gentleman name Max introduced himself as the night manager. When we told him our concern with the picture and explained what it meant to the Cuban community he said " the picture is art and that this was in the owner's house and if we didn't like it to leave, so we left."

And then he started sending emails.

Time for the you-make-the-call portion of the blog: Are these both Che, is one Gavin Turk, and which one is? 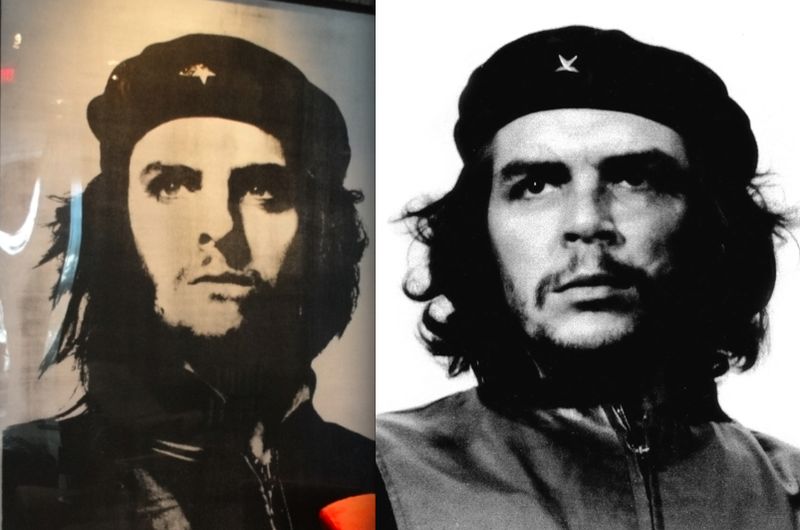