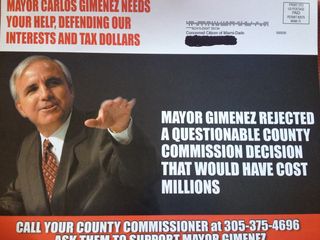 Looks like that robo-poll asking voters a week ago about a baggage-wrapping contract at Miami International Airport showed that County Mayor Carlos Gimenez is pretty popular.

A campaign-style flier that hit mailboxes Saturday shows a smiling Gimenez and asks Miami-Dade residents to "support" the mayor, who earlier this month vetoed county commissioners' decision to award the contract to the second-place bidder, Safe Wrap.

"Mayor Carlos Gimenez needs your help, defending our interests and tax dollars," the mailer says before asking recipients to call their commissioner to back Gimenez's decision.

A disclaimer on the mailer says it was paid for by TrueStar Group. Commissioners rejected Gimenez's recommendation to award the contract to TrueStar USA, the first-place bidder that currently encases luggage at MIA in clingy plastic. Commissioners said they could not trust the company because last year it asked for a reduction in its minimum annual payment to the county.

The commission is scheduled to take up Gimenez's vetoes at a meeting Tuesday.