UPDATED Teachers' union to lawmakers: Back off FRS 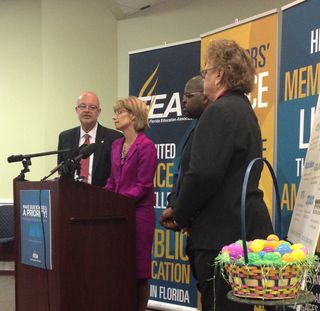 "Because of the actions of our political leaders, teachers have no expectation of continuing employment, no due process and a performance-based pay system that is not funded and based on bad or irrelevant data," McCall said. "Now they want changes to the pension system that guarantee retirement insecurity. These proposals make it more difficult to recruit and retain high-quality teachers."

The teachers' union considers the Senate proposal "the more palatable plan," but doesn't see the logic in either.

Said Ford: "It's all about politics. Part of the ALEC legislative agenda is to change defined-benefit plans into defined-contribution plans."

Later in the morning, House Speaker Will Weatherford responded, saying the union was using "scare tactics."